Message to Guests & Supporters of the AHRC Community Dinner Reception and Forum tomorrow, Friday October 5, 2018; please arrive no later than 6:00 p.m./ Special Call and Invite to the Media to Join 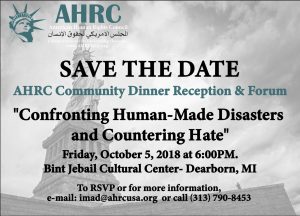 The American Human Rights Council (AHRC-USA) expresses its warm appreciation to the generous supporters of the AHRC Community Dinner Reception & Educational Forum  “Together, Against Hate, Violence & Terror- Confronting Human-Made Disasters and Countering Hate”  that will be held on Friday, October 5, 2018 at 6:00 p.m. at Bint Jebail Cultural Center in Dearborn. The event is primarily limited to its invitees and supporters.

AHRC-USA kindly asks the reception’s invitees and supporters to arrive no later than 6:00 p.m. on Friday, Oct 5th. Arriving on time will help us proceed with the program on time as well as it will help our Meet & Greet volunteers to better assist all expected guests to their seats.

AHRC is delighted to announce that it expects a full house. Your cooperation will be greatly appreciated.

Special Call and Invite to the Media to Join and Cover the AHRC Reception:

The unfortunate incidents and crimes of mass-shootings are on the rise. Very often, we are reminded with a sad and tragic event of such nature around and across the nation. AHRC team prepared a remarkable program and a set of distinguished speakers who will address the rapidly growing and ongoing challenge of acts of hate and violence that make mass violence a local, national and international concern.

This year’s program reflects diverse perspectives and views regarding this growing challenge.  The American Human Rights Council (AHRC-USA) has always advocated for effective engagement and partnership between communities and the law enforcement agencies that serve them.