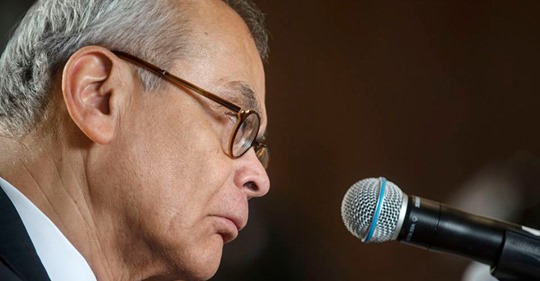 Michigan Department of Civil Rights Director Agustin Arbulu is under fire from more than 20 lawmakers who want him to resign, but other lawmakers and civil rights leaders are supporting the decision by the Michigan Civil Rights Commission to keep him in place.
The Michigan Civil Rights Commission made the decision to keep Arbulu on but reprimand him and require he go through training. An investigation found Arbulu “more likely than not” did make objectifying comments such as “would you look at that woman” and “check out her ass.

Jane Garcia, vice chair of the board for Latin Americans for Social and Economic Development, Inc. (LA SED), has worked with Arbulu on special projects and thinks the remarks he’s accused of making are out of character. She’s been impressed with his work leading the department, including addressing racial implications on big issues like the Flint water crisis and emergency management.

“Based on his history, I decided to take a strong stand when I saw all the articles being printed so negatively,” Garcia said.
She sent two letters to the Michigan Civil Rights Commission. In one, Garcia wrote, “What has occurred… amounts to a total political lynching of Dr. Arbulu.”

Imad Hamad, executive director of the American Human Rights Council, was also critical of the political reaction to Arbulu’s alleged remarks.
“Nobody argued that the remark was proper, and nobody will… But it’s not to a point that you go as far as to lynch the guy, politically,” Hamad said.
He questioned the motivation of lawmakers who were jumping on the opportunity to criticize Arbulu.

“In this political domain there is no mercy, no limits. It becomes a matter that can be used and abused based on certain political interests and agendas,” Hamad said.

Hamad said Arbulu shows up to almost every major civil rights event he puts on or attends and hasn’t been partisan in running the department.
“He’s always there, and he’s always available and he’s very accessible, and he takes issues seriously,” Hamad said.

Michigan Civil Rights Commission Chair Alma Wheeler Smith said in a letter to Whitmer recently the commission would consider making a second legal opinion on the matter, which the commission also considered in making the decision to retain Arbulu, public. They’re set to consider doing so at an Aug. 27 meeting, and LA SED is requesting the document be made public.
Gov. Gretchen Whitmer and more than 20 Democratic lawmakers are calling for Arbulu to resign. But some have refrained, including Rep. Isaac Robinson, D-Detroit, who is supporting LA SED’s request to make the second legal opinion public.

Robinson said he doesn’t think you can find a bigger champion of civil rights than Wheeler Smith, and lawmakers don’t have the information the commission did. The complaint went through due process, he said, and he sees the legislature’s calls for resignation as overreach.

“I just think we’re not the moral police. We also have to respect other government bodies that are independent,” Robinson said.
He’s had conversations with civil rights leaders who respect Arbulu’s work and support him.

Besides, he said, “If every person in Lansing would be fired for an off-color remark, we might have 110 empty seats” in the state House.

Ruben Martinez, treasurer of the statewide Latino advocacy group Michigan Latinos Moving Toward Advancement, pointed out Arbulu is a public employee and not an elected official. He criticized people who wanted to move right to getting rid of him instead of giving him a chance to correct.

“If he doesn’t get the message, and if he continues to do that, then they can dismiss him. But it should not be the court of public opinion that decides a personnel issue,” Martinez said.
Sen. Jeremy Moss, D-Southfield, was one of two Democratic senators who did not sign on to a statement calling for Arbulu to resign.

“I don’t like what he said. But I trust the judgement of the Civil Rights Commission more than any other entity, because they are the ones that are charged with investigating these claims,” Moss said.

He doesn’t want to set the precedent of legislative interference. He’s been pushing to expand civil rights protections to include LGBT Michiganders, he points out, and wouldn’t want his Republican colleagues in the legislature second-guessing the commission’s work on one of those cases.

“On any other claim, I don’t think the legislature should insert itself. So, I don’t think this is an exception to that,” Moss said.
Arbulu told MLive last week he is learning from his mistakes and will move forward as director of the Department of Civil Rights.

For Garcia, Arbulu’s actions speak louder than his words.
“I think he worked with all of us within the civil rights and the human rights community… he always stood for what’s right,” Garcia said.