BY THE NAME OF HUMANITY: SAVE THE CHILDREN OF GAZA-PALESTINE 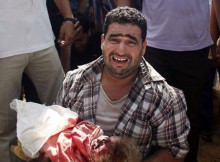 The bloodshed continues in the besieged Gaza-Palestine and the Israeli aggression and genocide continues.  No save heaven place for the innocent children in GAZA. The children of Gaza are awaiting the world’s conscience to wake up and stop such human tragedy. Israel must be held accountable to its war crimes. Time is due for ACTION.  Time is due for the just and lasting PEACE. Time is due to END the Israeli occupation so PEACE can be reached. SAVE the children of GAZA- Palestine. Palestinian children deserve PEACE. Do not let the Israeli war machine kill the children. ACT now. Act now. Act Now. The Humanity is calling upon us.