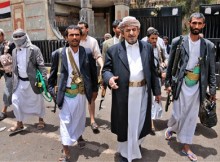 The American Human Rights Council (AHRC) welcomes the initiated efforts to set up peace talks in Geneva soon among the conflicting parties in Yemen. These anticipated peace talks, if successfully convened, come after months of bitter internal fighting as well as the foreign military campaign involving coalition partners in Yemen. The current conflict in Yemen has caused major destruction to the country’s infrastructure and created a serious humanitarian crisis in the country.  According to United Nation’s sources and other humanitarian relief agencies, the ongoing conflict in Yemen, has claimed more  than 1,500 people killed and more than 4,500 injured since March, many of them children. In addition, more than 300,000 people have been displaced looking for a save-haven. Yemenis are facing severe shortages in food, water and basic living needs, in addition to shortages of electricity and fuel.

AHRC reiterates its call for a peaceful political resolution that preserves the unity of Yemen and of the Yemeni people, where all segments of society are fully represented. AHRC continue its call to the international community to help bridge the gap between the conflicting parties in Yemen to end the fighting and restore peace. “We hope that these peace talks would pave the way towards ending the war soon in Yemen” said Imad Hamad, AHRC Executive director.  “The suffering that the Yemeni people are enduring thus far is a true tragedy and it must end” continued Hamad