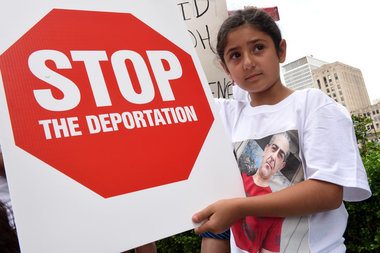 DETROIT – A federal judge has ordered a temporary stay on the deportation of 114 Iraqi nationals arrested by Immigration and Customs Enforcement agents earlier this month.

The order was issued Thursday by U.S. District Judge Mark A. Goldsmith in Detroit. A federal judge will make a decision on whether to stop Immigration and Customs Enforcement from deporting dozens of immigrants in Metro Detroit.

Most of the detainees are part of the religious minority in Iraq that has long been targeted by extremist groups.

Goldsmith issued a two-week stay, noting that he was “unsure whether (the court) … has the subject matter jurisdiction” to permanently prevent the deportations.

The Iraqi nationals, many of them from Metro Detroit’s Chaldean community, were arrested on the weekend of June 9 in an ICE sweep.

The American Civil Liberties Union filed a class-action lawsuit seeking to halt the execution of deportation orders against the detainees, including many who have been living in the U.S. for decades. The American Civil Liberties Union filed a class-action lawsuit Thursday seeking to halt the deportation of dozens of Iraqi immigrants arrested by federal agents in Metro Detroit over the weekend.

Attorneys for the U.S. government argued that the court does not have jurisdiction to hear the petitioner’s complaint, and that they’re fate should be determined by the immigration court. Man set to be deported to Iraq doesn’t even speak Arabic, family says

His family is terrified for the “hardworking family man,” but Hadeer Siba is also no angel.

Immigration officers on Sunday detained an unknown number of Iraqi citizens who were living in the U.S. illegally and plan to deport them to their native country, according to a statement from Immigration and Customs Enforcement.

Nearly all the detainees have past criminal records and were issued deportation orders, according to ICE, but were allowed to remain in the U.S. because of the dangers they could face if sent to Iraq, particularly among members of the Christian Chaldean sect.

The Iraqi government, in a deal with the U.S. reached in March, agreed to begin taking back those immigrants with deportation orders, leading to the wave of arrests, according to ICE.