AHRC thanks our friends and supporters who made “Refugees: Universal Crisis, Shared Humanitarian Responsibility” Dinner Reception a great success: 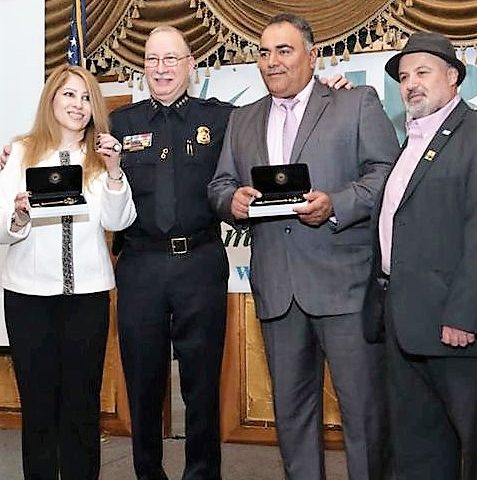 [Michigan, October 30, 2017]: In a spirit full of hope and determination over 500 guests including local, county, state, federal elected officials; leaders of community civic organizations and institutions joined the American Human Rights Council (AHRC-USA) in its first educational and awareness dinner reception that was held on Thursday, October 26, 2017 at 6 p.m. The topic was world’s refugee crisis and its impact on America and the rest of the world. The reception was  held at the Greenfield Manor Banquet Hall located in Dearborn, Michigan and featured an international speaker, a Syrian from Jordan, Dr. Nahed Ghazzoul, an  assistant professor at Al- Zaytoonah University in Amman, Jordan. Dr. Ghazzoul is an internationally-recognized authority on the Syrian refugees.

Dr. Ghazzoul’s s  presentation shed light on the major issues facing refugees in  host countries including her own experience as a Syrian, despite the fact she is not a a “Refugee”. Dr. Ghazzoul’s ended her talk by thanking the audience for their warm welcome and support of the cause of human rights.

The American Human Rights Council (AHRC-USA) also hosted Dr. Wassel Sbeiti, a special guest of honor from Lebanon. Dr. Sbeiti was recognized for his tireless work and dedication helping the poor and the needy especially Palestinian and Syrian refugees.  Dr. Sbeiti is a professor of  Neurosurgery at the Lebanese University Health Department with over 14 years of postgraduate experience and a record of 42 scientific publications and works.  Dr. Sbeiti has been a member of the Lebanese Neurology and Neurosurgery Association since 1997.

Dr. Hany Saqr, CEO of Life for Relief & Development  (LIFE) highlighted LIFEâ€™s ongoing relief efforts providing aid to refugees across the globe, to the victims of natural disasters in the US well as to the victims of Burma’s genocide.

The AHRC Forum on Refugees served as an important opportunity to take a deep look at and develop a solid grasp of one of the most important issues facing the world today. The American Human rights council (AHRC-USA) warmly appreciates all the elected officials who joined the event and presented certificates and tributes of appreciation to its two international guests particularly Mayor J. Oâ€™Reilly who presented the Key of the City and President of Detroit City Council, Brenda Jones who presented them with the Spirit of Detroit Award and the cityâ€™s special pin.

The American Human Rights Council (AHRC-USA) extends its sincere appreciation to all the reception’s supporters especially Life for Relief & Development for being the event’s  signature sponsor.  Without LIFE this special educational event would not have been possible.

“We thank our guests, our supporters and all the attendees for their contributions to the success of AHRC,” said Imad Hamad, AHRC Executive Director. “AHRC will continue to promote human rights by holding education events to raise awareness of the most pressing human rights crises of our time”  added Hamad.