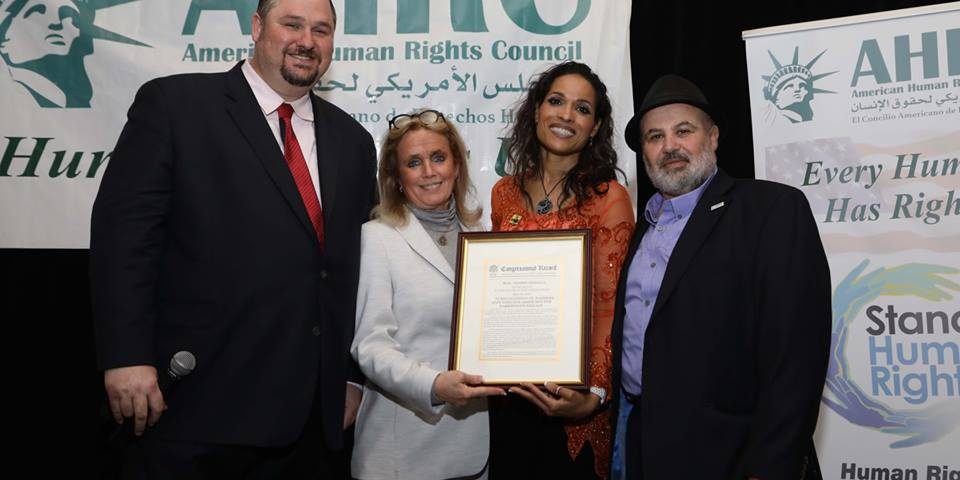 The American Human Rights Council (AHRC) is very grateful for the overwhelming support from our friends, donors and supporters that made the “Spirit of Humanity” Awards & Dinner Gala that was held on Friday, May 4, 2018 in Dearborn, Michigan a very special occasion embracing and celebrating human rights.

Despite the challenging times and the busy season, AHRC was proud to welcome over 800 distinguished guests resembling America at its best, showcasing the American mosaic of color, race, faith and race. It was gratifying to witness a full house of a diverse spectrum of our society reflecting our rich American diversity. Among the guests were also members of the diplomatic corps and consuls in Michigan representing the countries of Lebanon, Mexico, Yemen, Canada and Iraq.

Our heartfelt appreciation goes to everyone who joined us for this year’s celebration with our special guest Ms. Rasheeda Ali, daughter of the legend Muhammad Ali as we celebrate his living and timeless legacy.

AHRC expresses its heartfelt appreciation to Mr. Josh Landon, MY Fox News (Fox TV-C2) for being the Master of Ceremony.  The program began with the US National anthem performed by Artist and singer Yasmeen Suri, followed by both the Honorable, Brenda Jones, President of Detroit City Council and Chief Ronald Haddad of the Dearborn Police Department. Both presented proclamations and Spirit of Detroit Award to the honorees. Ms Ali was also honored with the City of Dearborn Medal.

AHRC presented its 2018 AHRC Spirit of Humanity Awards to Mr. Charles Anderson, CEO & President of Detroit Urban League; the Pakistan Women Association of Michigan for their exemplary work serving humanity.  AHRC proudly presented a special   Tribute of Public Service Award to State of Michigan, Rose Mary C. Robinson for her 50- years of service to the people of Michigan.

AHRC extends its sincere appreciation to elected officials, agencies and judges for the honor of their presence at this special human rights celebration. AHRC salutes all, over 100 elected officials, judges and official representatives, who joined the Gala this year.  AHRC thanks Congresswoman Debbie Dingell, Congresswoman Brenda Lawrence, US Senator Gary Peters for presenting Mrs. Ali and the awardees this year with Congressional Record citations and Special proclamations.

AHRC’s board President, Dr. Opada Alzohaili, delivered the AHRC remarks, welcoming all the Gala’s guests and expressing sincere appreciation for the support that AHRC receives from its friends and donors. He saluted Mr. Imad Hamad, AHRC Executive Director, and the hard work of all AHRC members especially the volunteers who worked tirelessly to assure another year of success. Dr. Alzohaili, welcomed the incoming AHRC Board President, Dr. Saleh Muslah, wishing him success in his leadership role.

“It is heartening to see the support and to hear the kind remarks from our guests and donors praising our work and our gala,” said Imad Hamad, AHRC Executive Director. “This year’s success inspires us to keep working hard to promote human rights in the US and abroad,” concluded Hamad.

Your story is published and below is a link to the publication http://www.thenigerianvoice.com/news/266296/ahrc-spirit-of-humanity-awards-dinner-gala-another-yea.html