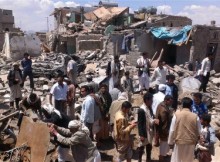 The American Human Rights Council (AHRC-USA)  reiterates its call upon the DHS to consider granting TPS to the nationals of Yemen who are in the US due to the escalating war and conflict since March of 2015. AHRC and several other community organizations requested that the DHS review this matter so nationals of Yemen avoid a precarious legal existence. The situation in Yemen is very alarming and very dangerous where no area in Yemen can be claimed a safe-haven for people. Yemen today is facing a true humanitarian crisis where people lack the basic living needs. We believe that Yemenis in the US who are subject to removal deserve the humanitarian measure of TPS. It is important to note that the crisis in Yemen does not seem to be heading for a resolution in the near future.

“The Yemen crisis is not ending anytime soon. We urge the Department of Homeland Security to extend TPS protection to Yemeni nationals in the US,” stated Imad Hamad, AHRC executive director.