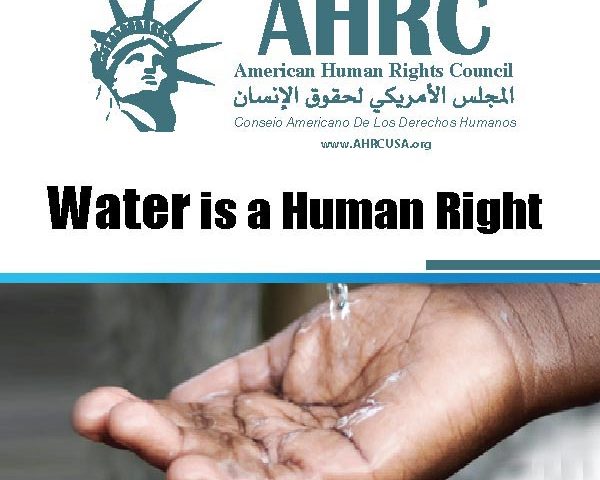 Water Day is intended to increase people’s awareness of water’s importance in the environment, agriculture, health, trade and its general importance to life. Water is fundamental to life.

Today, billions of people across the world are still living without safe clean water at their households, schools, workplaces, farms and factories. Water is not only a developing world issue. The Flint water crisis and the Detroit water shutoff crisis show that even rich developed countries that are water rich have water issues.

Access to safe clean water is critical to public health. This importance has been highlighted by the spread of the Corona virus. Hand washing is the most important defense against the spread of the virus. And for that, we all need water.

In Michigan, AHRC calls upon the state legislature to revise their 1040’s to include a provision and a formula to credit or rebate a large portion of a customer’s tax liability for settlement of water bills in arrears. Alternatively, the legislature can develop a venue through cooperative efforts that include the city of Detroit, Wayne County and the State to help find a fixed remedy to this crisis. AHRC appreciates the steps taken by the city of Detroit to help restore water service amidst the fear of the Corona virus spread.

“We should all care for the well-being of our fellow human beings out of a sense of respect for human rights,” said Imad Hamad, AHRC Executive Director. “But it is also enlightened self-interest,” added Hamad. “Diseases and viruses do not stop at city, county, state or country borders,” concluded Hamad.

AHRC encourages all people to learn more about World Water Day and to take action to ensure that every person has access to clean water and proper sanitation. To learn more and to get involved, please visit
http://www.un.org/en/events/waterday/
World Water Day, 22 March
www.un.org