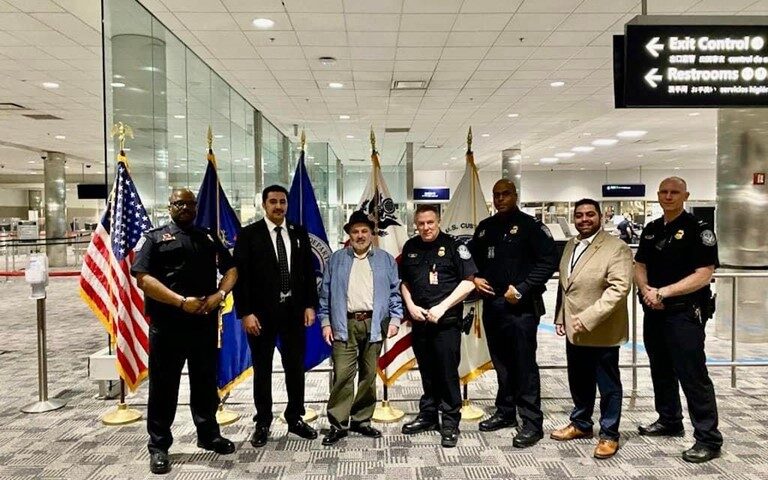 The American Human Rights Council (AHRC-USA) recently visited and participated in a discussion and tour of U.S. Customs and Border Protection’s (CBP) operational facilities at Detroit Metropolitan Airport (DTW), at the invitation of CBP agency leadership in Detroit.

The discussion was very informative and provided an update on how the CBP operates at the airport and all other ports of entry. The meeting with AHRC was one of series of other meetings and tours that was initiated by the CBP’s active engagement with community organizations and leaders.

AHRC commends CBP and its leadership in Michigan for hosting these important meetings that help the community leaders better understand CBP’s role and operational system at ports of entry. The presence of CBP’s leadership during this tour attests to CBP’s commitment to continue its active engagement with Michigan’s diverse communities, including the Arab and Muslim American communities.

The American Human Rights Council (AHRC-USA) is a strong advocate of law-enforcement- community engagement. Effective and active engagement is vital to help face the safety and security challenges facing the nation. CBP welcomed the opportunity to address any matters of concern or interest while AHRC stressed on the importance of ongoing engagement that is not reactive or crisis driven.

AHRC continues to advocate the stakeholder model of government-community engagement. This model requires inclusion and participation of all stakeholders. Transparency and real engagement are vital to address any challenges. Enhancing and advancing education, awareness and training are key to the effective and productive engagement. This is very critical for both government and society. Public safety is not just the government’s responsibility.

Dear author,
Your story is published and below is a link to the publication
http://www.thenigerianvoice.com/news/308144/ahrc-participates-in-discussion-and-a-tour-at-wayne-county-m.html

###
AHRC Mission:
The American Human Rights Council (AHRC) is dedicated to defending and protecting human rights as outlined in the U.S. Constitution and the United Nations 1948 Universal Declaration of Human Rights (UDHR). The AHRC was formed to protect these rights and advocate for anyone whose rights are being violated or denied. To that end, the AHRC will build a tenacious, objective, and carefully guided advocacy program that will serve to defend individual human rights, whenever and wherever they are being infringed upon
# # #
AHRC News & Views
Media & Information: (313) 9143251 or via email at: Info@ahrcusa.org
NGO in Consultative Status with the Economic and Social Council (ECOSOC)of the United Nations