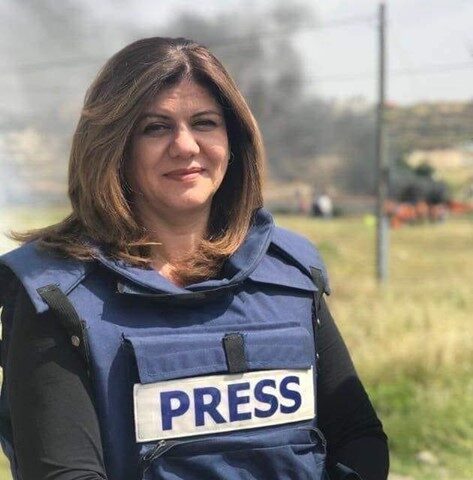 [Michigan- May 11 , 2022]: The American Human Rights Council (AHRC-USA) condemns in the strongest terms the brutal and cold-blooded killing of Palestinian -American Aljazeera reporter Shireen Abu Akleh. Ms Abu Akleh was with a group of press reporters reporting from the city of Jenin in the occupied Palestinian West-Bank when she was killed by a sniper bullet.

Shireen Abu Akleh was reportedly wearing a clear and visible press vest and a helmet. According to Abu Akleh’s fellow reporters and multiple-trusted media sources, Abu Akleh was targeted and intentionally shot by an Israeli sniper who shot her right under the ear. The killing of Abu Akleh, who served as Al Jazeera correspondent for the past 25 years, is another violation of international law and a blatant violation of human rights.

Reporters and journalists should be protected and not targeted. Many reporters were killed in the line of duty in different parts of the world including the Palestinian occupied territories. AHRC joins the world’s peace- loving people, human rights community and journalists across the world calling for an immediate, international, and transparent investigation regarding this crime and for holding all those responsible for the killing accountable.

AHRC calls on the Biden administration, the State Department and the United Nations to not spare any efforts to assure that a thorough and comprehensive investigation takes place. Reporters must be protected and not targeted under any circumstances regardless of their nationality or the identity of the violator. Reporters are heroes often in the heart of the most war zones in order to inform the public and write the first version of history.

There has not been an investigation that determined that Israel has killed Abu Akleh. However, eyewitnesses have accused the Israeli army. This accusation is bolstered by the fact that Israel bombarded AP headquarters facility in Gaza in violation of international law and norms. The AP building bombardment faded away without any Israeli accountability or liability.

The killing of Abu Akleh will only add to a tense situation and confrontations between the Israeli occupation army and the Palestinians. The situation is very alarming and subject to further escalation. The fact that we are a few days away from May 15, the date of the 1948 Palestinian Catastrophe (Al Nakba) coupled with the ongoing Israeli police assaults against the worshipers at Al-Aqsa Mosque compound means that we should expect more violence. This violence is avoidable with international intervention guided by international law and norms. Occupation is the root cause of all the violence. All that is needed is political will, from the United States specifically, to put an end to it.

“We are saddened by the death of Ms. Abu Akleh and send our sincere condolences to her friends and family,” said Imad Hamad, AHRC Executive Director. “The Biden administration has promised a foreign policy grounded in respect for human rights and international law,” added Hamad. “Palestine should not be the exception,” added Hamad.