AHRC opposes President Trump’s discriminatory executive order, salutes the judges who stood for the rule of law and thanks Americans who stood up for human rights: 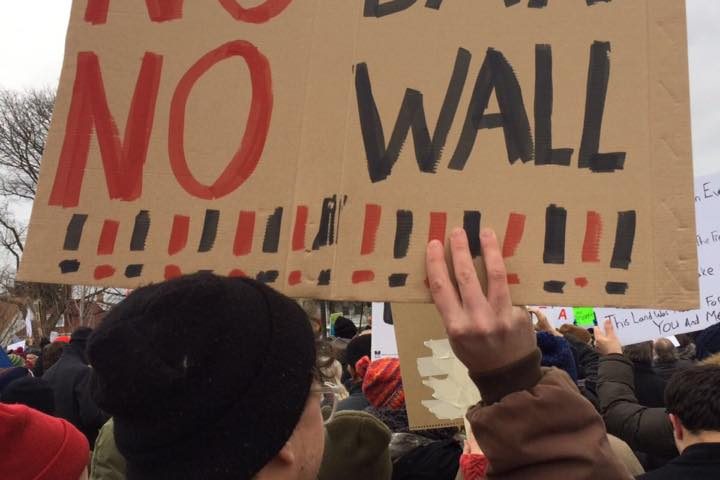 On January 27, 2017 the Trump administration issued its feared and harsh executive order on immigration. This executive order validated the fears and deep concerns about the serious threats to the human rights of immigrants in a Trump presidency. These fears were fed by the campaign rhetoric that demonized immigrants, Mexicans, Muslims and others. Indeed, candidate Trump on the campaign trail stated that “Islam hates us” and called for a ban on Muslim immigration to the US.

President Trump’s executive order on immigration translates the shocking divisive rhetoric into policy. The order suspends the US refugee program, a modest program, bars Syrian refugees and bans immigrant and non-immigrant visas to individuals from seven Muslim-majority countries for at least 90 days subject to renewal.

The American Human Rights Council (AHRC-USA) strongly opposes these harsh measures that demonize large groups of fellow brothers and sisters in humanity on the mere basis of national origin and religious membership. These measures will inflict massive hardship on innocent people who are being collectively criminalized and punished.

AHRC-USA is particularly concerned with Mr. Trump’s rhetoric that divides Arab immigrants and treats them disparately on the basis of religion. Mr. Trump stated he will “prioritize Christian refugees.” This, in effect, is Mr. Trump’s Muslim ban in all but name. This discrimination will add to religious divisiveness and tensions in the Arab world and elsewhere.

AHRC-USA believes that these harsh measures are a solution looking for a problem and constitute immigration deform at its worst. Immense hardship will be inflicted on large groups of the most politically weak groups in the world- the refugees escaping death and destruction.

The American Human rights Council (AHRC-USA) salutes the federal judges who have blocked Mr. Trump’s order. AHRC-USA believes that Trump’s immigration order is unconstitutional and immoral. We salute our American judiciary that are tasked with protecting the Constitution. However, we understand that this order is temporary and we urge Congress to visit the issue of immigration and pass well thought out and balanced immigration policy.

AHRC-USA also salutes the thousands of Americans who turned out to show love and support for fellow human beings who were detained at America’s airports for no fault of their own. While many believe that Trump’s immigration order resurrects the worst aspects of American history, AHRC believes the peaceful protesters at the airport represent the best of America’s present and future.

The American Human Rights Council (AHRC-USA) encourages continued engagement of all sectors of American society in standing up for human rights. We also urge an across the board unity in standing up to the immoral and/or unconstitutional policies of the current administration. The slogan of no fear, no hate, no ban and no wall should be the slogan of all components of the movement in solidarity with human rights and human dignity.

AHRC-USA will continue to advocate for the respect of human rights. President Trump’s immigration executive order, fear mongering and wall violate the spirit and letter of human rights. They also violate American values and tradition of welcoming the refugees and of building bridges, not walls.

The American Human Rights Council (AHRC-USA) will work with other organizations, individuals and groups to get Congress to pass comprehensive immigration reform that is balanced and respects the human rights of immigrants and refugees.

“We are truly disappointed by Mr. Trump’s immigration executive order, divisive rhetoric and plan to build a wall,” said Imad Hamad, AHRC Executive Director. “However, we are heartened with the outpouring of support for human rights and human dignity from people from all walks of life,” added Hamad.