AHRC OBSERVES THE ANNIVERSARY OF THE SABRA & SHATILA MASSACRES: 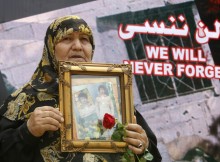 The American Human Rights Council (AHRC-USA) joins the peace loving people across the world in observing the 33rd year anniversary of Sabra & Shatila massacre that occurred on September 16, 17 and 18 of the year 1982 during the Israeli invasion to Lebanon. The Israeli invasion resulted in an American brokered agreement with the US guaranteeing the safety of Palestinian refugees in Lebanon. These guarantees were not honored. After President-Elect Bashir Gemayel was assassinated, Israeli army forces (IDF) and their allied Lebanese militias sealed off and besieged the two Palestinian refugee camps of Sabra and Shatila and heavily bombardment them. Later, the Israeli-allied militias entered the refugee camps where they raped, killed, slaughtered and injured a large number of unarmed civilians, mostly children, women and elderly people inside the camps. The massacre claimed approximately over 3500 hundreds people who were killed and injured in addition to hundreds of bodies who were buried in communal graves. As a result of this act of genocide against the innocent civilians thousands of refugees fled the camps seeking a safe haven.

The massacre shocked the conscience of the world and through the United Nations Security Council condemned the massacre with Resolution 521 (19 September 1982). This condemnation was followed by a 16 December 1982 General Assembly resolution qualifying the massacre as an “act of genocide.” “America promised the PLO that after it leaves Lebanon the US would guarantee the safety of the Palestinian refugees. Despite American promises, the Palestinian refugees were massacred in cold blood.

“Justice is not served until all the missing are accounted for and all the perpetrators are brought to justice,” stated Imad Hamad, AHRC Executive Director.