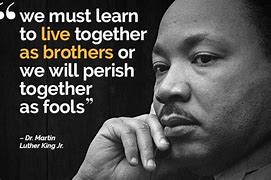 Dr. King is one of the most consequential figures of the twentieth century. He led a peaceful civil rights movement that changed the country for the better. In a country where African Americans were denied the promises of full citizenship, King worked tirelessly and incessantly demanding that the country live up to its vision of itself enshrined in the Declaration of Independence. In his I have a Dream Speech in 1963 he stated:

“In a sense we’ve come to our nation’s capital to cash a check. When the architects of our republic wrote the magnificent words of the Constitution and the Declaration of Independence, they were signing a promissory note to which every American was to fall heir. This note was a promise that all men, yes, black men as well as white men, would be guaranteed the “unalienable Rights” of “Life, Liberty and the pursuit of Happiness.”

Dr. King did not only change the United States, he also served as a global inspiration for change. He inspired people from all races and colors across the world to work toward a world free form hate and discrimination.

Much progress has been made. It is impossible to deny that this country has reinvented itself into a better version of itself for all its citizens. But the struggle is not over. Many of our citizens still do not enjoy full citizenship and circumstances that allow them to achieve their full potential. On May 14, 2020, the Washington Post had this headline: “Michigan settles historic lawsuit after court rules students have a constitutional right to a ‘basic’ education, including literacy.” No student should have to sue for the right to a basic education. This shows that the struggle for full equality continues.

To state that we are a divided nation is to state the obvious. Disagreements, even strong and heated disagreements, can be healthy for a democracy. The problem we have in this country today is lack of civility in debate and lack of civility in engagement with others. It is not unusual to hear of people unfriending friends and family on social media due to political disputes. Mirroring bad language or bad behavior is not a moral imperative, it is an insidious and contagious form of moral bankruptcy. We urge everyone, especially politicians, to rise above divisions and live up to the legacy of civility as lived by Dr. King. We can do better. We should learn from King’s example. Despite all the racial slurs against him, he remained honorable and dignified like a shining star above the muck of the day. We sorely miss Dr. King and his example these days.

Our national news is not happy news. An angry mob breached the Capitol with the aim of disrupting certification of the election. President Trump was impeached again, a highly divisive national event. The National Guard is in and around the Capitol to ensure a peaceful inauguration of the President Elect Biden. Polarization has reached into personal relationships. There is a national crisis.

AHRC Believes that people at the top set the tone for organizations and for countries. Setting the wrong tone is a failure of leadership and our politicians have set the wrong tone for the nation. The toxic political environment can change. If our leaders discontinue their heated rhetoric and demonization of the other side, they will become better role models.

“Given the change that resulted from Dr. King’s activism, every day we live the legacy of Dr. King,” said Imad Hamad, AHRC Executive Director. “Our nation, especially our politicians, need to learn the lessons of Dr. King,” added Hamad. “Dr. King’s ‘We must learn to live together as brothers or perish together as fools,’ is timeless advice,” concluded Hamad.

Help AHRC defend Human Rights, Donate Today:
These are challenging times. It is our common humanity that we are determined to serve. To donate, please visit: www.ahrcusa.org for safe & secured donation via PayPal.
# # #
AHRC News & Views
Media & Information: 313-790-8453
NGO in Consultative Status with the Economic and Social Council (ECOSOC) of the United Nations