AHRC mourns the passing away of bishop Hilarion Capucci, an Arab Christian champion of human rights and dignity: 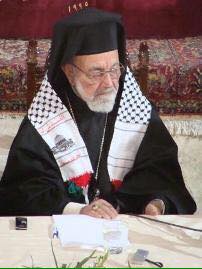 The American Human Rights Council (AHRC-USA) expresses its profound sadness for the death of Bishop Hilarion Capucci, the titular Archbishop of Caesarea in the Melkite Greek Catholic Church who died on January 1, 2017 in Rome, Italy.

Bishop Capucci selflessly dedicated his life to the service of others. In an act of compassion with Muslim-majority Gaza, Capucci participated in efforts to break the inhumane siege on Gaza by being part of a ship bringing supporters and aid to Gaza. Recognizing his efforts in the service of the Palestinian cause, the governments of Iraq, Egypt, Libya, Sudan and Syria honored him with postage stamps with his image. On 14 June 2009 he spoke at the American-Arab Anti-Discrimination Committee (ADC) convention’s annual Palestine Luncheon at which Mr. Imad Hamad, AHRC Executive Director, had the honor of meeting him.
AHRC-USA extends its heartfelt condolences to Bishop Capucci’s family, friends, supporters and to the Vatican for the death of a man of God who lived a truly extraordinary and inspiring life.

“Extraordinary luminaries like Bishop Capucci belie the misrepresentation of the conflict in Palestine as a Jewish-Muslim religious conflict,” said Imad Hamad, AHRC Executive Director. “The Bishop was a Catholic Syrian man of God who did not hesitate to become a spokesman and an advocate for the Palestinian people, a majority Muslim people,” added Hamad. “He will be sorely missed,” concluded Hamad.