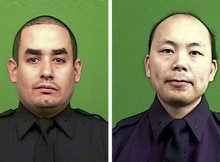 [Michigan, December 22, 2014]: The American Human Rights Council (AHRC) expresses its deep condolences to the New York City Police Department (NYPD) as well as to the families and loved ones of the two officers Wenjian Liu and Rafael Ramos who were shot to death on Saturday, December 20, 2014 in Brooklyn .  AHRC joins the nation in grieving the loss of these two officers as there is no justification for such a crime. This crime should not distract us from the need to preserve trust between citizens and the police and the need to rebuild this trust where the trust has been compromised by of the excessive use of force by the police.

The violent death of the two officers should not be attributed in any way to peaceful protests over the unfortunate deaths that resulted from citizen-police encounters in Ferguson and New York City. We hope that we as a human rights community can still have a civil dialogue with all the stakeholders on how to deal with the challenges presented by citizen-police encounters with minority community members and the use of force by officers. While we condemn the killing of officers Liu and Ramos, it is important to stay focused on the issue of police and community encounters. The police are the protectors of society.

AHRC is a strong advocate of community policing and of building bridges and trust between the police and the policed communities. We as members of the human rights community see the police as partners and not adversaries. AHRC calls for an immediate engagement and civil dialogue among all the stakeholders.

“As Americans we are facing serious challenges as to policing issues in some areas. The killing of the two officers in NYC is another reminder” said Imad Hamad,  AHRC  Executive Director. “We both want safety and respect for the laws and the constitutional rights of citizens. Engagement, dialogue and bridge building will help rebuild trust in the police.” continued Hamad.