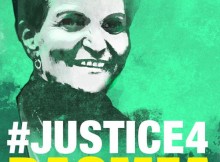 Ms. Odeh was arrested and held on October 22, 2013 by the Department of Homeland security. The government alleges that Ms. Odeh illegally obtained her naturalization by providing incorrect answers to questions on her first adjustment of status immigration application filed with the government 20 years ago. If convicted of the alleged offense, Ms. Odeh could face prison time, as well as the prospect of being stripped of her US citizenship and removed from the U.S.

On October 2, 2014 Judge Gershwin Drain  dismissed Ms. Odeh’s defense team quest for dismissal of the charges paving the way for the trial that will be held on Tuesday, November 4, 2914 at the US District Court of Eastern Michigan. In addition, the government prosecutors asked for an anonymous jury in an effort “perceived” to keep the names of the jurors secret from the defense attorneys.

The National Rasmea Defense Committee that consist of a number of  community- based organizations are calling for the US immigration services and the US Attorney’s Office of the Eastern District to drop the charges against Ms. Odeh.  Ms. Odeh’s experience with the Israeli authorities is similar to that of a large number of Palestinians under the Israeli occupation.  Sources close to Ms. Odeh claim she was subject to arrest and torture by the Israeli authorities in 1970.

AHRC shares the community’s deep concern over Ms. Odeh’s proceedings and will continue to monitor this case closely due to its sensitive political nature that smacks a case of abhorrent selective- prosecution. Beside the community’s call for the “dismissal” of the charges, AHRC calls for a fair, thorough, and transparent proceedings regarding Ms. Odeh case.  In addition. AHRC is very alarmed by the prosecutors effort to “disallow” the orderly public protests outside the federal courthouse during the hearings as being potentially “criminal” attempt at “jury tampering. It is a basic American right, a human right, to peacefully assemble to communicate a political message. The message is peaceful- support for Ms. Odeh.  We urge the government to respect the constitutional right of peaceful assembly for Ms. Odeh’s supporters and the due process rights of Ms. Odeh.

For more details and information about this case: