AHRC CALLS FOR IMMEDIATE INTERNATIONAL PROTECTION FOR THE KURDS IN THE CITY OF KOBANI: 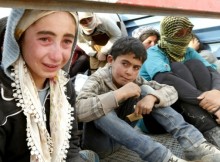 The American Human Rights Council (AHRC) calls upon the United Nations and the international community to extend immediate protection for the Syrian Kurds in the city of Kobani in north Syria. Kobani has been under the Islamic State (IS), also known as ISIS, siege for over three weeks. According to media sources and reports, the fight between the Kurds and IS is intensifying  in the streets and escalating rapidly and the Kurds in the city are in desperate need for assistance, otherwise, this city and its Kurds population could be victims of a new massacre of innocent noncombatants- especially women, the elderly and children.

According to a CNN report yesterday, Pentagon spokesman Rear Adm. John Kirby  said:” U.S. airstrikes “are not going to save” the key Syrian city of Kobani from being overtaken by ISIS”.   The developments shows that the  Islamic State “fighters” seized more than a third of the Syrian border town of Kobani so far.

AHRC is deeply concerned that the lack of immediate protection of Kobani will lead to another ISIS-made tragedy.  ISIS has no regard to human lives or any moral values. ISIS is nothing but a terrorist and extremist group that hijacked the faith of Islam where Islam is far from any association with them. ISS acts are not only un- Islamic but inhuman as well.

“Unfortunately, the world is about to witness another massacre committed by the ISIS”, said Imad Hamad, AHRC Acting Director. “The atrocities are real and so far we do not see a response that addresses the crisis we face. We hope that all people of conscience rise to the occasion and help end this ongoing tragedy” continued Hamad.