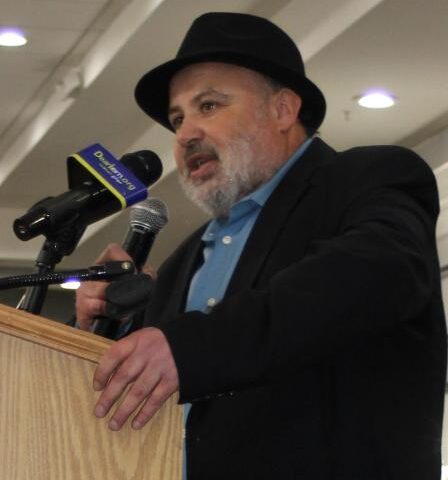 Hamad, the executive director of the American Human Rights Council, volunteered at a food giveaway in Dearborn, and then returned home to his house in the 6900 block of North Evangeline Street in Dearborn Heights.

What he thought would be a restful evening watching television and maybe napping ended up with him in the back of a police cruiser.
Shortly after 5 p.m., Hamad got a phone call from the Dearborn Heights Police Department, asking if he was alone in the house.
He said the officer on the other end of the phone directed him to comply with orders to place his phone on the ground and exit his house.
“I was told there would be police officers outside,” Hamad said. “I complied and when I went outside, there were a lot of officers outside with guns drawn.”
Hamad said he was ordered to turn around and put his hands behind his back, at which time he was placed in a police cruiser.
“They started asking me if I was alone, and if anyone else was in the house,” he said. “The same questions they had asked on the phone.”
While officers asked him questions, a team swept through his house, making sure there wasn’t anything wrong.
Officers then started to explain to Hamad that they received a phone call stating there was a young girl in the house that had been shot, and the shooter claimed they would keep harming others.
Dearborn Heights Police Chief Mark Meyers said the investigation is open, but that they will prosecute whoever made the call to the fullest extent of the law.
Meyers said what happened was a “swatting” incident. Swatting is a phenomenon that has been going on for several years all over the country, when someone calls the police and claims a major crime is happening at an address where the people at that address are unaware.
Dearborn Heights Police Chief Mark Meyers
“This is a major waste of department resources,” Meyers said. “And it creates a situation where the people inside the house may not always be compliant, as they don’t know what’s going on, but officers think a major crime has been committed.”

Meyers said the calls, which happen infrequently, but often enough to be a disruption in Dearborn Heights, are a huge waste of department resources and “take away from the true mission of the department, and disturbs the community.”

“There are neighbors who can’t leave their houses for a time,” he said. “There are officers not doing other tasks, and the follow-up investigations, all of which interrupts the community and the department.”
Meyers said if it rises to it, the person who made the fake report will be charged with a federal crime, as well.
“We’re going to follow through with the investigation … and we’ll prosecute anyone we can find who does this, whether it’s local, state, or federal,” he said.
Meyer said swatting also takes away from department resources when people in the community do it to people in other communities. He said they have taken calls from other states, such as Florida, when calls have come into departments down there and were traced back to Dearborn Heights.
A high-profile swatting case from 2017 in Kansas ended in the death of 28-year-old Andrew Finch. The person who made the prank call there, Tyler Barriss, was sentenced to 20 years in federal prison for making the false report.

Dave Herndon | Multimedia Journalist
Dave Herndon is a multimedia journalist with MediaNews Group, covering the Dearborn area for The Press and Guide. He started with the company in 2009, and has worked at several of their publications, covering everything from high school sports to government, and just about everything in between. He’s been a journalist since 2001, and also has worked in radio and television. In his spare time, he has authored comic books and works on various anthology books both fiction and non-fiction.
dherndon@medianewsgroup.com Follow Dave Herndon @NHDaveH