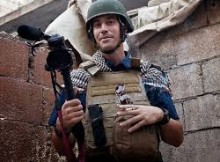 [Michigan- August 21, 2014] – The American Human Rights Council (AHRC) condemns the brutal killing of the American journalist James Foley by the ISIS terrorist group in Iraq.Mr. Foley was kidnapped and was reportedly beheaded and the killers videotaped the grisly slaying.  The killing of Mr. Foley shows the barbaric nature of such crime. AHRC express shock and sorrow over the savage murder of American journalist James Foley by the ISIS extremists.

As a journalist, Mr. Foley sought to convey the suffering and challenges facing the people of Syria, something not enough journalists do. His murder creates another emptiness in the voices of those who are speaking out for justice, fairness and civil and human rights in the Middle East. The freedom of the press should be protected and journalists are not combatants to be targeted or held hostages. Journalists should be honored for being witnesses and truth tellers who risk their life in danger zones. AHRC condemns in the strongest words these blatant acts of human rights violations and demands justice for Mr. Foley and all the others victims of ISIS who include people of all religious background. AHRC calls upon the immediate release of a fellow journalist Steven Sotloff who remains hostage and kidnapped.

On the “Free James Foley” Face book page, Mr. Foley’s mother stated: “He [James] gave his life trying to expose the world to the suffering of the Syrian people. We implore the kidnappers to spare the lives of the remaining hostages. Like Jim they are innocents. They have no control on the American government policy in Iraq, Syria or anywhere in the world.”

AHRC expresses its sincere and heartfelt condolences to the Foley family, hopes for the immediaterelease of the remaining hostages.  AHRC urges the international community to do more to save Iraq and Syria from the ongoing humanitarian crisis.The AHRC affirms that the human life is very precious and its value is not determined by race, color nor faith.

“This  tragedy should rally all of us against extremism and terrorism as our common enemy. These savage killings without a conscience do not reflect the essence of Islam that the terrorists claim to represent,” said Imad Hamad. AHRC Acting Director.

“Not only do they violate human decency, but they violate the fundamental principles of Islam practiced by the vast majority of Muslims in the world today.” continued Hamad.