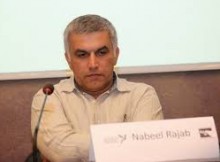 [Michigan-2014]: The American Human Rights Council (AHRC) joins Amnesty International and other fellow human rights organizations in calling for the immediate release of  Mr. Nabeel Rajab, a human rights activist in the Kingdom of Bahrain. Mr. Ragab is the President  of the Bahrain Center for Human Rights (http://www.bahrainrights.org/) .  On September 30, 2014, the Bahraini authorities detained Mr. Ragab upon his return from a European tour where he was advocating for human rights in Bahrain.  According to the UN High Commissioner for Human Rights,  Rajab has been accused of publicly insulting a Government institution on social media.AHRC calls for fair and transparent proceedings in Bahrain and for the immediate release of all detainees who are held for merely peacefully expressing their views. As a member of the United Nations the Kingdom of Bahrain is bound to respect the rights enshrined in the United Nations Declaration of Human rights. AHRC calls for a constructive dialogue as the  gateway to serve the best interests of all components of Bahraini society.

“We believe that the Kingdom of Bahrain should not punish individuals for merely expressing political views,” said Imad Hamad, AHRC Acting Director. “human rights advocates and defenders should not be subject to fear or intimidation” continued Hamad.