AHRC CONGRATULATES MR. JEFF COLLINS ON THE RELEASE OF HIS NEW BOOK “ DO THE RIGHT THING: MAKE ETHICS YOUR BRAND”: 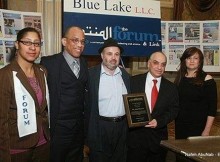 [Michigan, November 20, 2014]: The American Human rights Council (AHRC) extends its heartfelt congratulations to Mr.  Jeff Collins on the release of his new book “Do The Right Thing. Make ethics your Brand.”  Mr. Jeffrey Collins held a book singing on Wednesday,  November 19, 2014 at Plymouth United Church of Christ in Detroit in the presence of family, friends and supporters. Mr. Imad Hamad, a longtime Arab American civil rights leader and currently the AHRC Acting director, is mentioned in this book regarding the co-founding of BRIDGES (Building Respect In Diverse Groups to Enhance Sensitivity), a community-law enforcement forum. Mr. Hamad and Mr. Collins, then the US attorney of the Eastern district of Michigan, co-founded BRIDGES in the aftermath of the 9/11 attacks. Mr. Hamad Co-chaired BRIDGES from 2001 until 2013, establishing it as a Michigan institution and a model for community-law enforcement relations nationally and internationally. The book features the BRIDGES experience, among many other compelling information, facts and insights. In his excellent book, Jeff, as he is known to his family and friends, presents a wealth of information and insights on ethics from different perspectives, given the many different roles he played as a criminal law attorney, trial and appellate court judge, United States Attorney, county administrator, law professor, ethics teacher, motivational speaker and little league baseball coach.

“Whatever Jeff does he does with excellence and integrity.  His book is a valuable contribution to the ongoing conversation on ethics in society generally and in the legal field in particular. I urge everyone interested in this important issue to buy the book and read it,” said Imad Hamad, AHRC Acting Director.

” Judge Collins was a public servant of the utmost in integrity and care when dealing with Arab and Muslim Americans in the post 9/11 environment. He is the most qualified to write a book on ethics and the law,” said Imam Mustapha Elturk, AHRC  Executive board member. To order the book contact:  JeffreyCollins@MakeEthicsYourBrand.com   or (313) 929-1280