AHRC Congratulates Abraham Aiyash on his Election to the Michigan House 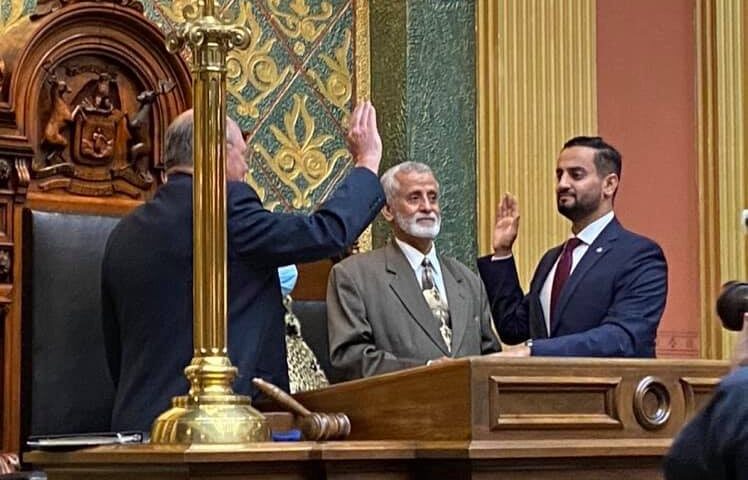 Rep. Aiyash is the first American of Yemeni origin to win a seat in the Michigan legislature. He succeeded the late Rep. Isaac Robinson who died on Sunday, March 29, 2020 at the young age of 44. The late Mr. Robinson was an honorable man, a true believer in human right and a founding member of AHRC.

AHRC congratulates Rep. Aiyash and all who won during the 2020 elections cycle. District-4 in Detroit is known as one of the most distressed district within the greater Detroit area. Rep. Aiyash has vowed to carry on Rep. Isaac Robinson’s legacy of serving the constituents of the district.

AHRC is confident that Rep. Aiyash will serve the public well and will live up to the vote of confidence that voters granted him. AHRC salutes Rep. Aiyash and wishes him the best in his public service in the Michigan House of Representatives. The state and the whole nation are facing extraordinary challenges and our public officials have a lot on their plate. We wish them all well serving the greater good.

“We congratulate Rep. Aiyash on his victory and we condemn all threats against him,” said Imad Hamad, AHRC Executive Director. “Mr. Aiyash is a promising young leader and a role model to our young generation,” added Hamad. “He deserves our support, hate deserves our condemnation,” concluded Hamad.

Dear author,
Your story is published and below is a link to the publication
http://www.thenigerianvoice.com/news/294011/ahrc-congratulates-abraham-aiyash-on-his-election-to-the-mic.html

Support AHRC today:
Please contact AHRC at 313-914-3251 or via email at info@ahrcusa.org for sponsorship information and details. Further program details will be announced as we move close to the date of the Gala on Friday, December 4, 2020. All sponsors will be thanked and announced during the show. Deadline to join and provide your ad or logo is no later than November 25, 2020.

AHRC is pleased to announce that Mr. Ahmed Ahmed, an internationally renowned comedian will serve as the virtual Gala main guest. Mr. Ahmed is the cofounder of the “Axis of Evil” comedy tour and has appeared in several films and television shows. He has also directed the award winning documentary, “Just Like Us” now available on a Youtube for free, https://m.youtube.com/channel/UC0_KtOBq5SrSL9Kdtx3c_Cw

Donate to AHRC:
These are challenging times. It is our common humanity that we are determined to protect. To donate, please visit: www.ahrcusa.org for safe & secured donation
# # #
AHRC News & Views
Media & Information: 313-790-8453
NGO in Consultative Status with the Economic and Social Council (ECOSOC) of the United Nations