AHRC CONDEMNS THE TERRORIST AND CRIMINAL ATTACK IN CHATTANOOGA, TENNESSEE 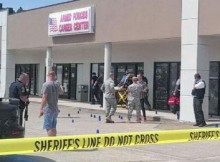 The American Human Rights Council (AHRC-USA) condemns the terrorist and criminal attack in Chattanooga, Tennessee killing four Marines and injuring three other people yesterday, July 16, 2015. This violent attack reminds us that the threat facing the U.S and the world is indeed real. Taking a human life is the worst human right violation.

Our heartfelt condolences and prayers go to the families of the victims and the nation. AHRC calls upon the authorities to conduct a transparent investigation regarding the motives behind such unspeakable crime and act of terror.

Indeed it’s another shock and another human tragedy. At a time when Muslims are getting ready to celebrate the Muslim Eid- Festivity, after a month of fasting and prayer, enemies of humanity chose to take lives in a despicable and hateful way.

“We condemn this crime in the strongest terms and urge all to remember that terrorism and criminality have no religion or nationality,” said Imad Hamad, AHRC Executive Director. “HATE is our common enemy and it should not be tolerated.  We stand united against it” continued Hamad.