AHRC CONDEMNS THE MURDER OF THE THREE UNIVERSITY OF NORTH CAROLINA ARAB AND MUSLIM- AMERICAN STUDENTS, CALLS FOR STATE AND FEDERAL INVESTIGATION OF THE CRIMES, AND URGES COMMUNITY VIGILANCE: 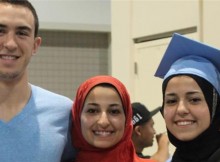 AHRC condemns the murder of the three University of North Carolina Arab and Muslim- American students, calls for state and federal investigation of the crimes, and urges community vigilance:

[Michigan, February 11, 2015]: The American Human Rights Council (AHRC-USA) joins all fellow citizens of good-will in expressing sorrow and condemnation for the killing of the three Arab and Muslim American University of Carolina students, 23-year-old Mr. Deah Shaddy Barakat, his wife  Mrs. Yusor Mohammad (21-year-old)  and her sister, Ms. Razan Mohammad Abu-Salha (19-year-old) at Chapel Hill yesterday’s evening, Tuesday, February 10, 2015.   The gunman has been identified as Craig Stephen Hicks, 46,  he was arrested and charged with the murders pending further investigation. He was a neighbor to the victims. The community at large was alarmed by this cold-blooded crime as it comes amidst a drastic increase of Islamaphopia in America . AHRC holds the advocates of hate in America against Arabs and Muslims responsible  for spreading divisiveness, racism and hatred towards the Arab and Muslim communities.

AHRC calls upon the Chapel Hill Police Department, the FBI and the US Department of Justice  to swiftly investigate this crime and its motives. Hate should neither be tolerated nor justified under any circumstances as the nature of this crime raises serious concerns and raises serious questions that must be addressed and answered. The murderer must be held accountable and justice must be served to its fullest. AHRC calls upon the community at large and especially American Arab and Muslim community centers and  institutions to be vigilant and report any suspicious  behavior to the authorities.

AHRC expresses its heartfelt condolences to the families of the victims. May the victims rest in peace. AHRC will continue to monitor the investigation closely due to its sensitive nature and due to its chilling impact on the community at large.

“This heinous crime shocks our conscience. We suspect it is the product of daily incitement against Arabs and Muslims. Hate and intolerance is our common enemy” said Imad Hamad, AHRC Executive Director. “Regardless of the motives, and we suspect it is motivated by hate of Arabs and Muslims, we expect a thorough, transparent and  complete investigation of the crimes, ” continued Hamad.