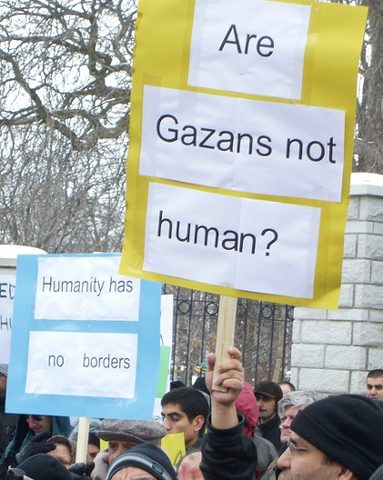 The American Human Rights Council (AHRC-USA) cautiously welcomes the ceasefire reached between Israel and the Palestinians in the Gaza strip. This ceasefire came after massive Israeli war assault, bombardments and air-strikes that caused countless suffering for the people of Gaza, Palestine.  Gaza has close to two million people population living in a very limited geographic piece of land close to139 square miles. Gaza ranks as the third most densely populated area in the world.

This latest serious development requires immediate international intervention to compel Israel to fully respect the ceasefire and lift its unjust siege of Gaza that has turned it into an open-air prison by design.   The continued siege of Gaza is a blatant violation of human rights and is against the international humanitarian laws.

According to human rights organizations every aspect of the life of the Palestinians of Gaza is controlled by the Israel. Israel determines what goes into Gaza even food and medical supplies. Gaza is an ongoing humanitarian crisis.

The American Human Rights Council (AHRC-USA) calls on the United Nations to help end this thinly veiled occupation of Gaza as a basic step towards peace. As many commentators have noted, oppressing the Palestinians and denying them their most basic human and political rights is not conducive to peace.

“We are doubtful that this ceasefire will last, we have seen it all before, the same vicious cycle rooted in occupation and injustice,” said Imad Hamad, AHRC Executive Director. “The definition of insanity is doing the same thing and expecting a different outcome, but we know how to end the conflict: The Israeli occupation must end,” added Hamad. “Without respecting all the rights of the Palestinians, the weaker party in the conflict; a Palestinian state with its capital in Jerusalem, the carnage will continue with Palestinians the overwhelming majority of those suffering and dying,” concluded Hamad.