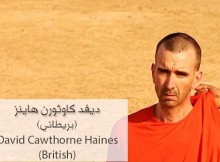 The American Human Rights Council (AHRC) strongly condemns the brutal killing of David Haines, the British aid worker who was held hostage since March 2013  by the Islamic State (IS) terrorist group. The group is also known as ISIS and ISIL. According to media reports, Haines was beheaded on September 14, 2014 making him the third  to be killed  after American journalists James Foley & Steven Sotloff . AHRC joins the rest of the world in condemning the IS’s murders and acts of terror against innocent journalists, reporters, civilians of all faiths and races in Syria, Iraq and Lebanon.

Mr. Mike Haines, David’s brother, said “The Muslim faith is not to blame for ISIL, nor is it the fault of people of Middle Eastern descent.” According to the associated Press report. ISIL are extremely dangerous and pose a threat to every nation, every religion, every politics, every person,” Mike Haines stated that British jihadists who return to the country should “face the consequences of their actions.” He had earlier issued a written statement paying tribute to his brother, who he said was “most alive” when doing aid work.

“This is another example of the extremists’ ongoing terror against humanity” said Imad Hamad, AHRC Acting Director. “ The world must define and address the challenge and the root causes of this growing threat against humanity” continued Hamad.