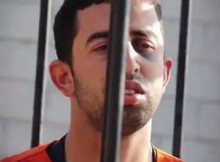 [Michigan, February 4, 2015]: The American Human rights Council (AHRC-USA) joins all peace- loving people across the world in condemning in the strongest terms the barbaric acts of the so- called “Islamic State”/ISIS/IS against its captives among them the recent killing of the Muslim Jordanian Pilot, First Lieutenant Muaz al-Kassasbeh, 27 years of age, who was captured on December, 2014 after his jet crashed in Syria during U.S.-led coalition airstrikes. ISIS executed Al- Kassasbeh by burning him alive while caged. This brutal crime comes days after the Islamic State beheaded two Japanese citizens it held captive, journalist Kenji Goto and security company owner Haruna Yukawa. AHRC joins the rest of the world in condemning IS’s murders and acts of terror against innocent journalists, reporters, civilians of all faiths and races in Syria, Iraq and Lebanon. This is another example of the extremists’ ongoing terror against humanity. The world must define and address the challenge and the root causes of this growing threat against humanity.

AHRC expresses its condolences to the families of the victims and demands justice for all the other victims of IS who include people of all religious backgrounds. AHRC reminds all that terrorism has no religion and that the terrorist acts of a few should not be attributed to a religion, a sect or a national group.

“The barbaric killing of Jordanian pilot Lt. Al –Kassabeh is added to the list of crimes committed by the terror group ISIS. This murder should unite us against extremism, violence, and terrorism,” said Imad Hamad, AHRC Acting Director. “This crime is the work of depraved individuals. It shocks the conscience and violates the fundamental principles of Islam. It should not be attributed to Islam or Muslims. We offer our sincere condolences to King Abdullah, the people of Jordan and the Kassasbeh family,” said Hamad.