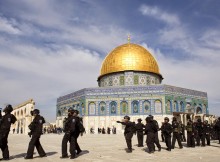 The American Human Rights Council (AHRC-USA) condemns in the strongest terms the ongoing Israeli attacks on the holy Al Aqsa mosque compound in  occupied East Jerusalem that have led to several injuries among Palestinian worshipers and resulted in the burning and destruction of several parts of the mosque compound facility. The Al Aqsa mosque compound is the third holiest Muslim site in the world. The assaults on the compound indeed risks sparking a religious war. AHRC stands firm that religious sites, regardless of the particular faith and regardless of the location, should be fully respected and not be subject to any military or police attacks or political maneuvering and grand standing as is happening today with the Al Aqsa mosque compound and Israeli right wing politics. AHRC calls upon the international community and all peace loving people across the world to join hands and help protect the Al Aqsa mosque compound from Israeli violations by ending the siege on the compound and putting an end to the the Israeli restrictions on Muslim worshipers that violate the free exercise of religion rights of Muslims.

“The Al Aqsa mosque compound is the third holiest site in Islam, located in occupied East Jerusalem.  The Al Aqsa issue, unfortunately, has become an Israeli domestic politics issue for grand standing and maneuvering with reckless disregard to the importance of the issue to the billion and  half Muslims around the world. It is the whole world’s responsibility to end Israeli violations against the Al Aqsa compound and help end Israeli occupation of Palestinian land and usher in a Palestinian state with its capital in East Jerusalem,” stated Imad Hamad, AHRC Executive Director.