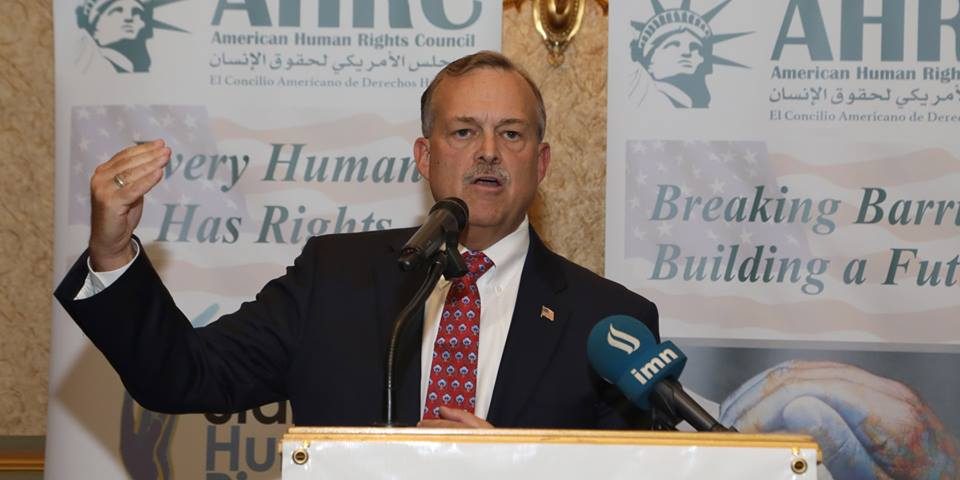 The American Human Rights Council (AHRC-USA) expresses its warm appreciation for the supporters and guests of its annual Community Dinner & Forum that was held on Friday, October 5, 2018 in Dearborn.

Over 400 distinguished and diverse guests; including regional and international law enforcement agencies and police departments, community, civic and faith leaders; participated in this year’s reception addressing the human-made disasters and the ongoing and rapidly growing local, national and international challenge of hate, violence and terror at all levels at home and abroad. “Together, Against Hate, Violence & Terror” was this year’s Reception’s theme.

The reception began with the US National anthem performed by Dr. D. L. Teamor, Pastor and Founder & executive Director of the Calvary House and an AHRC Advisory Board Member, followed by a formal greeting and welcome by the city of Dearborn’s mayor, the Honorable Jack O’Reilly’ and the Honorable Brenda Jones, President of Detroit City Council and Dr. Saleh Muslah, AHRC Board’s President.

The first award went to Chief Ronald Haddad of Dearborn Police Department and the Police Department for Dearborn’s being a model law enforcement agency in partnering with communities, building trust and mutual respect, through education, training and outreach activities.

The second Exemplary Leadership award was presented to the Honorable Reggie Davis, a radio icon, leader in government and advocate for non-violent conflict resolution, for his distinguished leadership of the CeaseFire Youth Imitative, Inc., life-time devotion to curbing youth violence and for promoting diversity, peace and inclusion.

AHRC recognizes Ms. Husnah Khan with a tribute of Honor:

The American Human Rights Council (AHRC-USA) proudly acknowledged Ms. Husnah Khan, newly graduated lawyer, for her exemplary devotion to justice on behalf of a wrongfully convicted fellow citizen after spending 16 years behind bars for a murder that he did not commit. Husnah as intern, along with dedicated other volunteers, lead this effort and spent tireless hours that led the court to reopen the case and granted him a release pending the final proceedings. AHRC salutes Husnah Khan for such great humanitarian job on behalf of justice. To read more about the case visit:  http://legalnews.com/detroit/1465108/

The American Human Rights Council (AHRC-USA) expresses its heartfelt appreciation to His Excellency, Fernando Gonzalez Saiffe, Consul General of the Consulate of Mexico in Detroit for presenting AHRC with an Award recognizing AHRC’s work for promoting human rights, helping create a culture of respect for human rights and for attaining the NGO status with the United Nations.

AHRC expresses its heartfelt appreciation to the reception’s sponsors and supporters. The support we get from sponsors and supporters is indispensable to our work. This year’s sponsors were the backbone, true champions of human rights that enabled AHRC to have another successful event this year. The American Human Rights Council (AHRC-USA) expresses its sincere appreciation to all of its members and volunteers, whom were the driving force behind the AHRC success.

“AHRC’s work is team work,” said Imad Hamad, AHRC Executive Director. “The staff, the board, the donors, the supporters, and the volunteers- all are partners in our successes and achievements,” concluded Hamad.