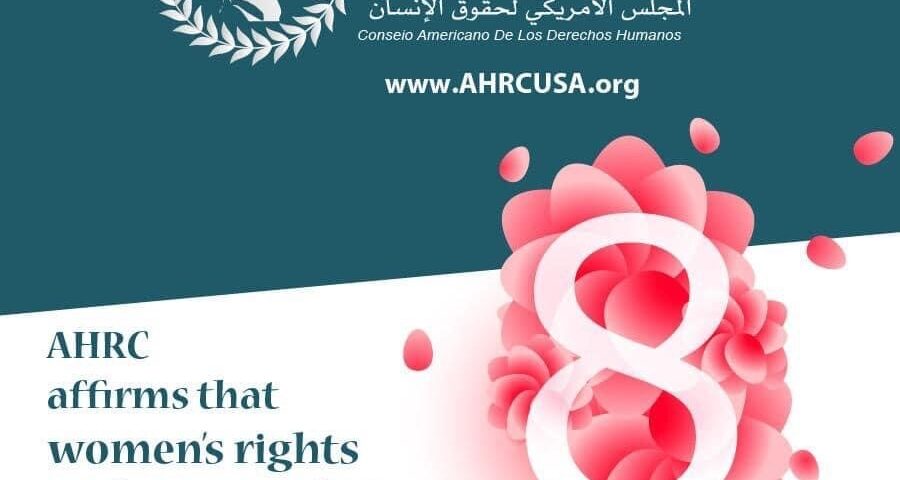 [Michigan, March 8, 2021]: The American Human Rights Council (AHRC-USA) joins the nation and the global community in celebrating International Women’s Day. The Day falls on March 8 annually. March is also Women’s History Month, an occasion to celebrate women successes and contributions to all humanity.

The United Nations began celebrating International Women’s day in 1977. On this special day, the world recognizes women’s contributions and reaffirms that the struggle for the rights of women is at the core of the struggle for human rights worldwide.

As we celebrate Women’s day, the world is facing exceptional health and economic crises due to Covid-19. And the hardships fall disproportionality on women who are the primary caretakers for the children, the sick and the elderly. Also, jobs disproportionately staffed by women have been the most impacted by the pandemic.

On this day and during this month it is important not to forget the impressive achievements of women. The existence of challenges should not blind us to the achievements and advancement of women in all sectors of the private sector and the public sector.

“Having lost my mother two years ago, Women’s Day and month for me are times to reflect on the wombs that bore us,” said Ms. Zarinah El-Amin, Anthropologist and Founder of Book Power Publishing. “The consistent strength and giving that women pour into those around them on every level, in every vein, in every way – often silently – is sorely missed when it is no longer available,” added El-Amin. “The challenge for us is to not only feel the loss when taken away, but to recognize and appreciate the sacrifice when it’s alive and well but silent,” concluded El Amin.

“Women are more than half of humanity, they are the only majority that is a minority,” said Imad Hamad, AHRC Executive Director. “The way a society treats its women remains the litmus test for its commitment to human rights,” added Hamad.

http://www.thenigerianvoice.com/news/296828/ahrc-celebrates-international-womens-day-march-8.html
####
Save the date: AHRC “Spirit of Humanity” Gala 2021
The American Human rights Council (AHRC-USA) is pleased to announce its annual AHRC “Spirit of Humanity” Awards Gala that will be held on Friday, October 22, 2021 at 6:00 p.m. Due to Covid-19 pandemic crisis, the gala’s location, program and details will be released and announced in the future.

Help AHRC Protect Human Rights:
These are challenging times. It is our common humanity that we are determined to protect. To donate, please visit: www.ahrcusa.org for safe & secured donation
# # #
AHRC News & Views
Media & Information: 313-790-8453
NGO in Consultative Status with the Economic and Social Council (ECOSOC) of the United Nations