AHRC calls for the protection of the civilians of Aleppo, provision of humanitarian relief: 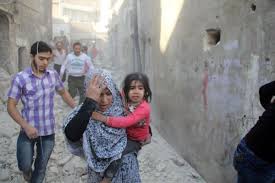 [December 13th, 2016] The American Human Rights Council (AHRC-USA) is deeply troubled by reports of abuse of civilians in Aleppo, Syria’s second biggest city. AHRC calls upon the Syrian government and all parties to the conflict in Syria to respect the human rights of the hundreds of thousands of civilians of Aleppo. The civilians and other noncombatants of Aleppo should be treated according to the humanitarian laws of war. We are deeply troubled by reports of mass and summary executions of noncombatants. We urge the Syrian government and the rest of the world to put a stop to the reported atrocities.

“We are deeply troubled by reports of summary and mass executions of noncombatants in Aleppo. AHRC condemns all human rights abuses regardless of the identity of the abuser or the identity of the victim,” said Imad Hamad, AHRC Executive director. “Winning the peace is more important than winning the war. Inflaming grievances will not help bring peace and prosperity to Syria or the Middle East,” said Hamad.