AHRC CALLS FOR THE IMMEDIATE RELEASE OF MALAK KHATIB, A PALESTINIAN CHILD IMPRISONED BY THE ISRAELI AUTHORITIES. 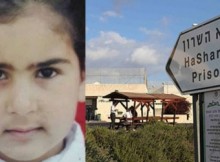 [Michigan, January 28, 2015]: The American Human Rights Council (AHRC) calls for the immediate release of Malak Khatib and all other Palestinian- children detainees and prisoners from Israeli jails and prisons.

Malak’s case is not the only example of Israel’s imprisoning Palestinian children. Fourteen- year- old Malak was arrested by the Israeli authorities on December 31, 2014 for allegedly throwing stones at the Israeli soldier nearby her school. She is one of over 700 other Palestinian children arrested or detained without charges by the Israel government. The United Nations International Children’s Fund (UNICEF) noted in 2013 that “there appeared to be a pattern of ill-treatment during the arrest, transfer and interrogation of child detainees in the West Bank.” The US Human Rights Watch noted that the “Israeli military justice authorities arbitrarily detained Palestinians who advocated non-violent protest against Israeli settlements” and that “Israeli authorities continued to sentence Palestinians according to their age at the time of sentencing even if they were children at the time of the offense, and documented cases in which Israeli authorities arrested children in their homes at night, at gunpoint, questioned them without a family member or a lawyer, and coerced them to sign confessions in Hebrew, which they did not understand.”