AHRC CALLS FOR CALM AND ORDER IN BALTIMORE AND FOR A RATIONAL AND DEEP NATIONAL CONVERSATION ON POLICE AND POLICED COMMUNITY RELATIONS: 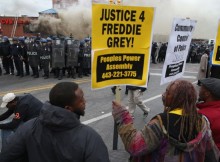 The American Human Rights Council (AHRC-USA)  is deeply troubled by the violence in Baltimore and by the death of Freddie Gray in police custody that has triggered this violence.  AHRC joins all peace loving people  in calling for a transparent investigation regarding this most recent tragedy in Baltimore. Previously, the deaths of Trayvon Martin, Michael Brown, and Eric Garner have also resulted in protests and violence on the part of some of the protesters. AHRC believes that these deaths raise many important public policy questions that go to the very essence of human rights and democracy. AHRC calls for a comprehensive approach that deals with racial disparities, race relations, community policing and police use of force.

While AHRC believes that the right to protest is a moral, constitutional right and human right, we condemn in unequivocal terms the lawlessness and violence committed by some people. We remind everyone that it is unfair to hold all the protesters, most of whom are peaceful, responsible for the acts of a few. We join our voice to Amnesty International’s in calling on “the Baltimore Police to exercise restraint during the protests, to prioritize non-violent means and only use force when absolutely unavoidable, in a manner designed to minimize injury.”

AHRC is firm in its belief that policed communities are natural partners of the police and that the relationship between the two should be that of a partnership and not an adversarial relationship.

“When I look at the images sent from my iPhone the Detroit News in January of 2015 that ‘[R]acial profiling, racism, discrimination and the degrading of human life are all elements of the real challenge that we all face. Building relationships between communities and law enforcement helps build trust that can help diffuse crises. Frank, direct and open communication can help stakeholders develop tools for handling grievances before they develop into crises. Time is due for respectful engagement and partnership between the police and the people. The police are not the enemy. Reducing community-law enforcement relations to an adversarial reality is a loss for both the police and the policed communities. Policed communities are citizens that the police serve and protect while honoring their constitutional rights and the country’s democratic values. Communities and the police can, together, build a spirit of partnership through engagement and dialogue that can take us on the path of healing and lead us to realize our ideal of a country that values all human life and honors the dignity of all.’ What I have written then still applies today. Let’s have that serious conversation today, not tomorrow,” said Imad Hamad, AHRC Executive director.