Addiction to Opioids: A Common Challenge, a Shared Responsibility 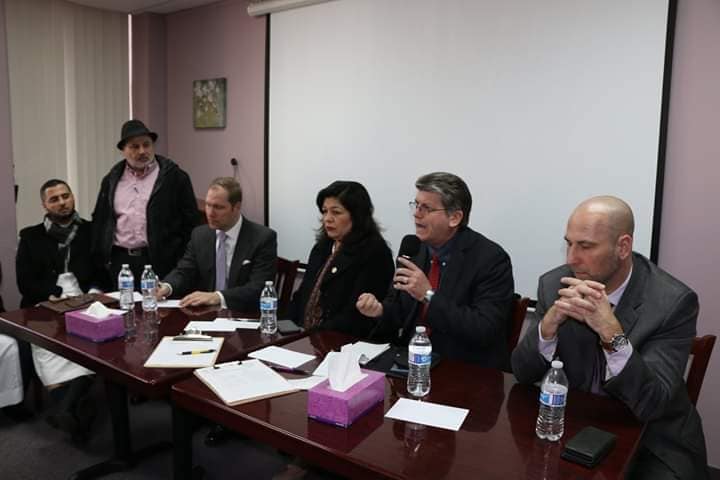 On Tuesday, February 18, 2020, the American Human Rights Council (AHRC-USA) organized and hosted a community leadership meeting and open discussion to address the crisis of opioid addiction within the Arab and Muslim American community.

The common denominator of all those in attendance was the full determination to join efforts to fight this rapidly growing epidemic. Participants exchanged views, analysis and diagnoses as to this crisis destroying lives and taking lives. All stressed the importance of raising awareness that addiction is a disease and not a personal and moral failure. The culture of shame and silence is literally taking innocent lives. There is no shame in seeking help.

The US Attorney, the FBI and the DEA stressed on the importance of collaborative efforts between the community and law enforcement agencies to fight this danger and to help save lives. They offered all the needed assistance to help the community at large contain and fight this challenge. The same sentiment was affirmed by all participants who pledged to increase their awareness and prevention efforts.

The American Human rights Council (AHRC-USA) recognizes that there are several great community initiatives that have been working hard to address this epidemic. Their efforts are commendable and indeed they are helping save lives. This meeting was not meant to send the message that nothing is being done about the crisis. We can always do more.

“The opioid challenge is a common challenge facing us all,” said Imad Hamad, AHRC Executive Director. “AHRC calls upon all community leaders, civic and religious, to spare no effort to help spread further awareness about this most serious challenge,” added Hamad.

“We too are passionate about working together to diminish the tragic consequences of opioid misuse and abuse,” said Mr. Bruce R. McColley, Assistant Special Agent in Charge II, Detroit/OCDETF Strike Force. “It is obvious that these parents, sisters, brothers, aunts and uncles, are passionate in working together to reduce the impact the opioid epidemic is having on us all,” added McColley.

“There can be no denying America is facing a national crisis regarding opioids and other similar drugs. More than 100 people, mainly youth, die daily from opioids and similar drugs,” said Imam Steve Elturk, AHRC Board Member and Imam of the Islamic Organization of North America, IONA. “The meeting with government officials, clergy, community leaders, teachers, etc. organized by AHRC was a step in the right direction. It is through our combined resources that we can beat this epidemic,” concluded Elturk.

“The meeting was an eye opener. The Imams, educators and social workers shed light on how the opioid crisis has affected the vulnerable unsuspecting population – the young and elderly,” said Michigan attorney Shereef Akeel, AHRC Advisory Member. “The need is great to allocate more resources to schools to educate our young and their families before it is too late. We need to act with a sense of urgency,” added Akeel.

“There is a lot of stigma, judgement, shame, and even just ignorance associated with drug addiction, and with mental illness in general. We all need to work together as a community to bring awareness to this problem. Whether you are friend or parent, an educator, or a health care workers, everyone can make a difference.” Said Dr. Laila Hajjar, President NAAMA Michigan Chapter.

Dear author,
Your story is published and below is a link to the publication
http://www.thenigerianvoice.com/news/285392/addiction-to-opioids-a-common-challenge-a-shared-responsib.html

Addiction to Opioids: A Common Challenge, a Shared Responsibility