The Rohingya Crisis- the ongoing crime against humanity 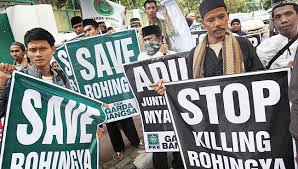 The American Human Rights Council (AHRC-USA) joins all peace-loving people in the world in expressing its grave concern regarding the humanitarian crisis in Burma as to the Rohingya.

According to media reports and other human rights organizations’ reports from the field, the Burmese military’s latest attack on the Rohingya civilians has resulted in the burning of over 700 houses.  Five villages have been destroyed completely with  over 100 deaths and the detention of thousands. Thousands have also been displaced- fleeing the country seeking safe-haven in neighboring countries. The fleeing civilians are exposed to violence  and have been prey to human trafficking gangs.

AHRC-USA condemns the ongoing assaults against the Rohingya. We call for the immediate release of all detainees, the immediate lifting of sanctions and restrictions on them. We also urge providing immediate access to food and healthcare for the over 80,000 people who are being trapped.

AHRC-USA warns that the humanitarian crisis of the Rohingya is very alarming and merits immediate international attention and intervention to save lives. The crimes committed against the Rohingya bear the indicia of a genocide. The world must act swiftly to end the ongoing human rights abuses against the Rohingya Muslims.

“All human beings have human rights and all governments are obligated to respect these rights,” said Imad Hamad, AHRC Executive Director. “We urge the Burmese government to stop the abuses perpetrated against the Rohngiya and for the rest of the world to spare no effort in ending the  abuses directed against them-  these abuses have been going on for too long,” continued Hamad.