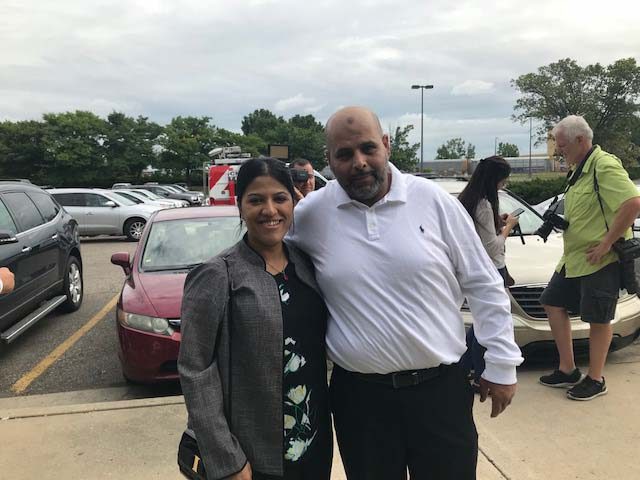 Husnah Khan’s interest in wrongful conviction cases was sparked in 2014 after she watched a “CNN Death Row Stories” episode about Edward Lee Elmore, who was convicted of killing an elderly widow and sentenced to death in 1982.

He was freed in 2012 after a law school intern came across his case, and later worked to free him. Khan herself has since played a role in getting a new trial for an incarcerated client — Mubarez Ahmed, wrongfully convicted in 2002 of the 2001 murders of Lavelle Griffin and LaTanya White.

The Wayne County Circuit Court in August granted a new to Ahmed, a client of the Michigan Innocence Clinic (MIC) that investigated Ahmed’s case for 8 years before filing a post-conviction motion in October 2017.

Ahmed was released earlier this month and has a hearing date set for the first week in November.

When Khan, then a student at Wayne Law School, landed an internship at the Michigan Innocence Clinic in 2016, she was one of eight interns and the only non-U-M law school intern.

At that time, Ahmed’s case was in the “Further Investigation” category, not yet accepted by the MIC because of the lack of an affidavit from the sole “eyewitness” stating she had been pressured into picking Ahmed out of a live lineup by the detective in charge of the case.

Hers was the only evidence of the case against Ahmed.

Khan said she knew the clinic would need the cooperation of the eyewitness “and the eyewitness herself would want to recant her testimony on her own terms, after holding this mistruth in for so many years.”

“She was not an easy person to get in touch with since she moved so many times,” Khan said. “Former Fox 2 Problem Solver Scott Lewis — now a private investigator — helped me track her down.”

In the final days of her internship, Khan set up a meeting with the eyewitness at a McDonald’s, along with Lewis and his wife and fellow investigator Nancy Russell. The trio waited for what seemed like a lifetime, says Khan, who kept texting the woman.

“When she finally walked through the door with her uncle, it seemed like all the breath I had been holding in was let out,” Khan said.

“She told me her uncle was a man of the church and he told her she could not stand me up since he was reading all of my messages to her.

“With tears running down her face, she signed the affidavit and it was notarized right then and there.”

Khan’s work was not yet done. The following day, she called an individual who had overheard “Little Jay,” a man who bragged about committing these murders.

The individual agreed to sign an affidavit. Since the document had to be notarized and Khan was preparing to move out of Ann Arbor, she contacted Lewis who secured this second crucial affidavit that day.

Both affidavits allowed the MIC to accept Ahmed’s case.

“This experience was rewarding because I knew I was making a tangible difference — the work I was doing every single day mattered,” she said.

“Like so many law school interns who have gone before me, I was enthusiastic and humbled to know I was helping not only the clients the clinic was representing or interested in representing, but the legal field itself. When one person is wrongfully convicted, an injustice has occurred,” Khan said. “

When people have been wrongfully convicted, she said, “a tragedy continues to repeat itself, impacting the individual, their loved one, and the community from which they were removed.

“I also knew I was putting my interest in investigative work to good use, strengthening my communication and collaboration skills, and learning from one of the best attorneys in the field, U-M Law professor and MIC co-founder David Moran, my supervising attorney for the Ahmed case,” she said. “I also had the honor of receiving guidance from MIC attorney Imran Syed, and MIC Fellow Rebecca Hahn, the supervising attorneys on some of my other cases.”

Khan is also grateful for the assistance she received from clcinic support staff members Jennifer Simmons and Victoria McCabe, as well as the support of her parents, Iftakhar and Maimunah, and siblings, Rufaidah, Zahrah and Zubair.

“And this outcome wouldn’t have been obtained had it not been for the work of over 20 other student attorneys, the exhaustive efforts of Scott Lewis and Nancy Russell, and the hard work of MIC attorneys and support staff,” Khan said.

Not only did Khan have success, but she also set a precedent — after her internship, the Michigan Innocence Clinic began accepting internship applications from non-MLaw students.

“I’m proud to have paved the way for more students to have life-changing experiences working on wrongful conviction cases,” she said.

The Bloomfield Hills resident, who graduated from Wayne Law this past spring, and will take the bar exam in February, is applying to jobs within the public interest sector, as well as opportunities within the courtroom.

“Since my long-term goal involves becoming a member of the judiciary, I would love to work for a judge and gain insight into their techniques and learn from their experiences,” Khan said.