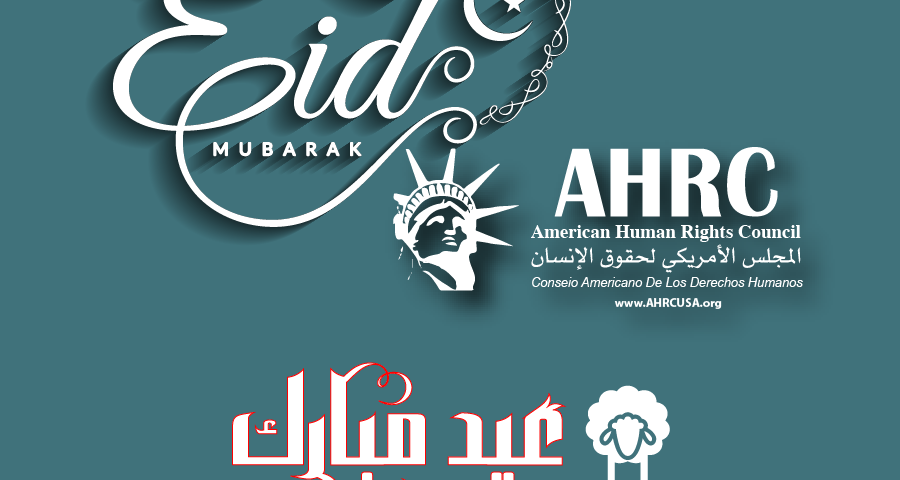 The American Human Rights Council (AHRC-USA) extends its greetings to Muslim Americans and Muslims around the world on  Eid Al-Adha, Feast of the Sacrifice. The three-day Eid starts this Friday September 1, 2017 and ends on Sunday September 3.

Eid Al-Adha (Feast of the Sacrifice) is one of two major holidays in the Islamic calendar- the other being Eid el Fitr. Al Adha Eid marks the end of the annual Muslim pilgrimage (Hajj) to the holy sites in Mecca and Medina in the Kingdom of Saudi Arabia. Pilgrimage to Mecca, the Hajj, is one of the five pillars of the Islamic faith.  AHRC-USA wishes all the Muslim pilgrims a safe and rewarding completion of the pilgrimage. For more information about the pilgrimage season visit:

In a unique step, a few mosques in Dearborn and a few other Michigan cities will be holding a unified Eid Prayer services. These services will begin at 7:30 a.m. and the Eid prayer will begin at 9:00 a.m. followed by a festival at 10:00 a.m. The Unified Eid service in Dearborn will be held at Dearborn’s Community Civic Center.

“We wish Muslim Americans and all Muslims around the world a blessed and safe Eid,” said Dr. Opada Alzohaili, AHRC Board’s President.

“Religious holidays are causes for celebration as well as for generosity,” said Imad Hamad, AHRC Executive Director. “On this Eid, we remember our religious and human obligation to help those in need around the world, including the victims of Hurricane Harvey in Texas ,” added Hamad.