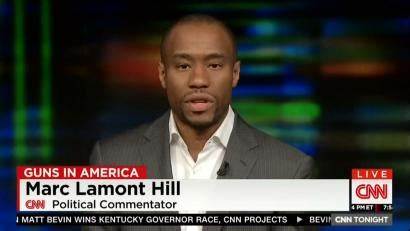 The American Human Rights Council (AHRC-USA) is deeply troubled by CNN’s decision to fire Dr. Marc Lamont Hill from his position as a CNN commentator simply for expressing his views on the Palestinian-Israeli conflict.

This termination is a reminder that the freedom of speech is limited when it comes to expressing views on the ongoing conflict in Mandatory Palestine.  Incidentally, Dr. Hill expressed a view that is shared by people of all backgrounds, including Israeli Jews. It is not a crime to call for all Mandatory Palestine to be one state where everyone has equal rights.

The viability of the two-state solution has become questionable due to Israeli created facts on the ground. Several observers, including former President Carter, have stated that Israel is moving into being a full-fledged Apartheid state. For people who believe in human rights and human dignity, equal rights for every human being regardless of their faith or national origin are better than Apartheid. Apartheid can be used and has been used to describe the situation in the West Bank. Within the 1948 borders, the Palestinians who have Israeli citizenship continue to face discrimination and are treated as second class citizens.

AHRC affirms that there should be no media imposed and enforced litmus test on the Palestinian-Israeli conflict. A litmus test would mean that only one viewpoint would be privileged and that is the viewpoint that echoes whatever the Israeli government deems as acceptable. Even the Israeli media allows for diverse viewpoints.

We are alarmed by this crisis and we see parallels in this case with the case of Dr. Steven Salaita who was fired by the University of Illinois simply for expressing a viewpoint deemed offensive by a segment of America’s Israel supporters. One of the reasons that the US is a great country is our academic and media freedoms. No university or media outlet should suppress speech to appease a segment of the population.

AHRC stands firmly with the courageous stand of Dr. Hill. We call on CNN to restore Professor Hill to his position.

“We are deeply troubled by CNN’s retaliation against Dr. Hill for expressing a viewpoint consistent with human rights and international law,” said Imad Hamad. ““It is a viewpoint that one can disagree with but to fire Dr. Hill and defame him as a result, that is unconscionable,” concluded Hamad.