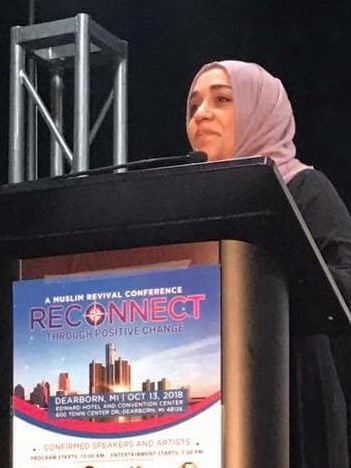 The American Human Rights Council (AHRC-USA) commends the organizers, volunteers, participants and the supporters of the 2018 Reconnect Conference, Through Positive Change that was held at the Edwards Convention Center in Dearborn, on Saturday, October 13, 2018 from 10:00 a.m. to 11:00 p.m.

This year’s conference was a true inspiration not only by its level of organization, nor by the eloquent diverse speakers and scholars who spoke but by the unprecedented participation of the youths.  Close to 2000 participants filled the conference center with optimism and determination reconnecting with each other and reconnecting with the reality and the common challenges facing Muslim Americans amidst one of the most difficult political times in America.  Morale was high, high enough not to give up, instead to have the determination to be engaged and involved in matters of public concern.

The 2018 Reconnect Conference in Dearborn this year was a landmark event and the first of its kind. Remarkably, close to seventy percent of the participants were female. Such high participation by women reflected how much the young generation strives to be in the heart of action and not be identified as the silent invisible majority.

The American Human Rights Council (AHRC-USA) as a proud supporter and participant, salutes the 2018 Reconnect Conference organizers. The Conference was a collaborative effort of several centers, organizations, civic and faith leaders who worked tirelessly to plan, facilitate and execute this truly phenomenal historical event in Dearborn. Special recognition goes to the #MyICD volunteers of the Islamic Center of Detroit & the American Muslim Leadership Council (AMLC) who spearheaded the effort to help organize the proceedings of the conference.

“It was truly inspiring and encouraging to witness such a large number of young participants reconnecting through positive change,” said Imad Hamad, AHRC Executive Director. “It was a day full of positive energy and a day of determination to rise to the challenges as one team,” added Hamad. “Despite all the negative political rhetoric and sad news that we hear about every day, the Conference reinforced the optimism about the future,” concluded Hamad.

Dear author, Your story is published and below is a link to the publication http://www.thenigerianvoice.com/news/271666/the-american-human-rights-council-ahrc-usa-the-2018-recon.html