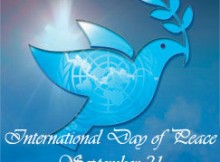 The American Human Rights Council (AHRC-USA) joins the world community in observing the International Day of Peace that falls on September 21 of every year. The International Day of Peace was recognized and adopted by the United Nations resolution 36/37 on 1981. The nations of the world united to declare this day a day to advance the ideals of peace among all nations across the globe. In addition, the United Nations adopted resolution 55/88 considering September 21 as an annual day of non- violence and no war. The theme of this year’s commemoration is “Partnerships for Peace – Dignity for All,” which aims to highlight the importance of all segments of society to work together to strive for peace.

This year the International Day of Peace is observed despite great challenges facing several countries experiencing turmoil where the dominant language is that of war and conflict and division resulting in hundreds of thousands of deaths, injured, destruction and displacement. The ongoing crises in Syria, Iraq, Lebanon, Egypt, Gaza-Palestine, Yemen, Sri Lanka , Liberia, ROHINGYA and Burma indicate that there is still much work to be done to make world peace a reality. The cycle of violence and counter violence deprive innocent people, and children in particular, the dream of peace and the pursuit of freedom and happiness that all people deserve. One major challenge facing the free world nowadays is the growing threat of terrorism, the unprecedented refugee crisis and the tragedy of millions who fled their native countries seeking a safe haven for their families.

“let us stand with the millions of people across the world who are suffering the devastating impact of violence and conflict. Let us share ideas and plans for helping and supporting them in their time of dire need.” Said UN Secretary-General Ban Ki-moon. “Let’s make this International Day of Peace a day without violence, and a day of forgiveness. If, for one day, we can live in a world without aggression and hostility, we can imagine how much more is possible,” he added.

AHRC calls upon all peace- loving people at home and abroad to live up to the true meaning of peace and to work diligently to make peace a reality. AHRC, along with sister organizations in human rights advocacy, with the support of our friends and donors, work to make a world of peace built on the foundation of respect for human rights a reality.  Together, we can build a peaceful world free of hate, terror, extremism, torture, abuse and injustice, a world that respects the human rights of all regardless of race, gender, faith or national origin.

“Peace is a basic human right for all and is a net gain for all. We all have the equal right to Peace.” said Imad Hamad, AHRC Executive Director. “We hope that this year’s anniversary would serve to advance peace and greater understanding among people across the globe” continued Hamad.