AHRC mourns the passing away of theNAACP’s chairman emeritus Julian Bond and offers sincere condolences to his family and the NAACP: 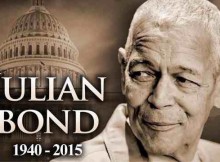 The American Human Rights Council (AHRC-USA) joins the rest of the civil rights, civil liberties and the human rights community in mourning the death of an icon of the American civil rights movement, NAACP chairman emeritus Julian Bond who died at the age of 75 on August 15, 2015.

Mr. Bond was a true civil and human rights fighter on behalf of equality and social justice. He spent years fighting hate and discrimination and devoted long years to building bridges of understanding working towards a world characterized by tolerance, co-existence with liberty and justice for all. AHRC extends it heartfelt condolences to the Bond family and the NAACP on the loss of this great civil rights leader.

“With the death of Mr. Julian Bond another giant of the American civil rights movement passes away. He is irreplaceable” said Imad Hamad, AHRC Executive Director. “Our solace is that his memory inspires us in the civil rights and human rights movement to continue the struggle to achieve the vision that he worked to realize, a world free from bigotry, hate and racism with liberty and justice for all,” continued Hamad.