AHRC joins the nation in celebrating the 157th Anniversary of Juneteenth 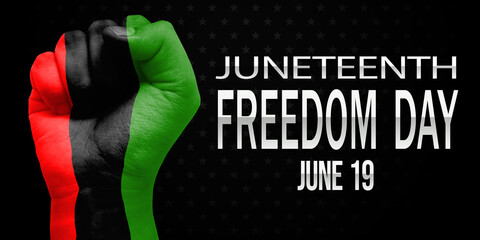 The American Human Rights Council (AHRC-USA) joins the nation in celebrating and observing the 157th anniversary of Juneteenth that falls on Sunday, June 19.

Juneteenth has been celebrated by African Americans since the late 1800s. It was made a national holiday in 2021. It’s a day of remembrance of slavery era in the United States when blacks were enslaved and denied their basic human rights. The Civil War and abolition did not end the suffering of African Americans. They continued to suffer all forms on discrimination. It was only with the Civil Rights Act of 1964 that real change started taking place. .

While we should celebrate the end of slavery and not forget our history, we must continue the fight against all forms of racism, including environmental racism and mass incarceration. In addition, Juneteenth serves as a reminder that slavery in the past and in its current modern forms and shapes are crimes against humanity. The struggle for racial justice continues.

“The year following June 19, 1865, the first official Juneteenth celebrations took place in Galveston, Texas. The original observances included prayer meetings and the singing of spirituals, and celebrants wore new clothes as a way of representing their newfound freedom,” said Professor Michael Thomas, AHRC Board Member. “If there was ever a time to have prayer meetings and sing spirituals, now is that time,” added Thomas.

“June 19 is the celebratory day acknowledging freedom from slavery. It’s a reminder that the shackles are gone and living on a plantation where criminal and immoral behaviors saturated upon ancestors are gone. Yet, scars remain,” said Ms. Minnie Washington, AHRC Board Member. “Let’s make our voice count by voting. Many died for us to have this opportunity. One thing we can do is honor our ancestors’ sacrifice by voting, which is an important way to recognize June 19,” concluded Ms. Washington.

“Juneteenth is a day to recognize and honor the memory of all the victims of slavery and to celebrate freedom and the achievements and contributions of black Americans to America,” said Imad Hamad, AHRC Executive Director. “Declaring Juneteenth a national holiday is of great symbolic value,” added Hamad.