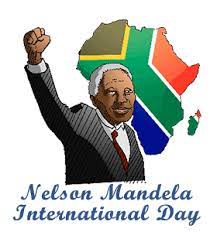 The United Nations declared Nelson Mandela’s Day on November of 2009, through resolution A/RES/64/13 as a tribute and recognition of Mandela’s tireless, unwavering, and courageous fight for freedom and justice.

Nelson Mandela’s Day is a special occasion for human rights and peace-loving people across the world to celebrate the legacy of Nelson Mandela, an icon of the human rights movement. A true leader and true fighter whose legacy continues to inspire all at home and across the globe. Mandela’s message is universal and continues to inspire people across the world who are fighting Apartheid, occupation, injustice, and inequality.

Today, we remind ourselves of Mandela’s timeless words: “Do what you can with what you have and where you are”. These are very inspiring words that affirm regular people’s ability to fight for justice.

Mandela is an exemplary leader who gave the struggle for freedom its true meaning. His humanity combined with his steely determination serve as a role model for all of us in our fight for justice and equality for all.

Today the Palestinians in the Occupied Territories live under an Apartheid regime. They continue to be inspired in their fight for justice by Mandela and his words: “We know too well that our freedom is incomplete without the freedom of the Palestinians.” The Palestinians honored Mandela with a giant statute in Ramallah, Palestine. There are number of murals of Mandela on the Palestinian side of the Apartheid Wall Israel built in the occupied West Bank.

“It is often stated, to discourage activism: What can one person do?” said Imad Hamad, AHRC Executive Director. “The legacy of Mandela answers that question with: A lot,” added Hamad. “Mandela was an ordinary man who did extraordinary things,” concluded Hamad.