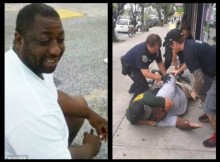 [Michigan, December 4, 2014]: The American Human Rights Council (AHRC) shares the deep concerns of the civil and human rights community regarding the grand jury’s decision not to indict the N.Y.P.D officer who held Mr. Eric Garner in a chokehold  leading to Garner’s death. On Wednesday, December 3, 2014, the grand jury at Staten Island voted not to bring criminal charges against the Police officer in the death of Mr.Garner. The jury’s decision came as shocking news to Mr. Garner’s family, friends as well as observers including civil and human rights groups across the country. The decision not to indict came after months of investigation and testimonies. This decision came two weeks after another jury in Ferguson decided not to indict the officer who fatally shot and killed Michael Brown who was unarmed.  AHRC believes we have one of the best judicial systems in the world but that does not mean that the system does not need changes and improvement. AHRC understands the high level of frustration, particularly among the African American community, these decisions have created.  The deaths of Mr. Garner and Mr. Brown should spur us to examine issues of police use of force, transparency and accountability for police action, community trust in the police, and community policing.

“It should trouble all of us that African American young men continue to be victimized by the legal system” said Minnie Washington, AHRC Executive Board Member. “The struggle for the respect of human rights of all Americans is not over ” continued Ms. Washington.

“This is neither a liberal v. conservative issue, nor a Republican v. Democratic issue. This is a human rights issue. The most important human right is the right to life. These cases should move us to examine the grand jury procedure when police use of force is considered” said Imad Hamad AHRC acting Director. “The most conservative voice on the Supreme Court, Justice Antonin Scalia, has questioned the grand jury procedure when police conduct is being examined. As a nation we need to focus on systemic changes so that similar tragedies do not recur in the future,” continued Hamad.