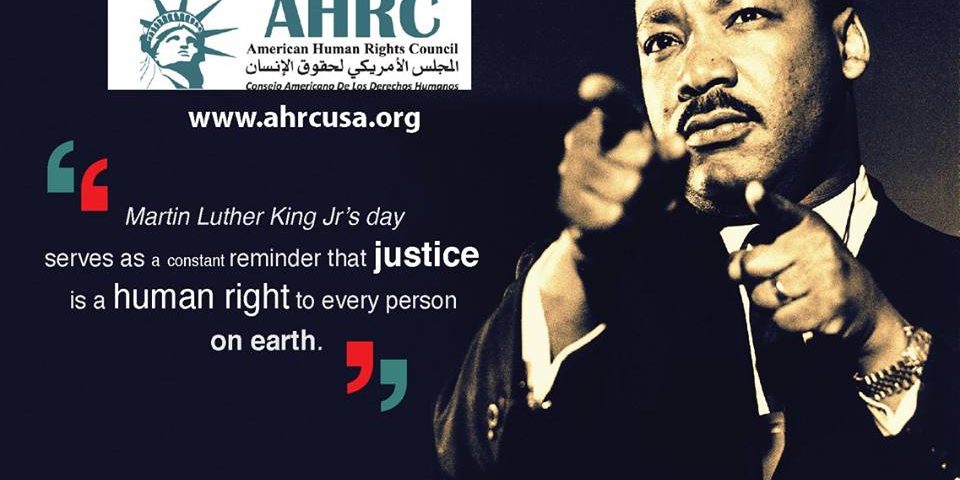 The American Human Rights Council (AHRC-USA) joins the nation and all peace-loving people around the world in observing the legacy of Dr. Martin Luther King Jr., a human rights hero, a legend whose struggle and determination helped transform the United States and inspired human-rights activists worldwide. Martin Luther King (MLK) Day will be observed on Monday, of January 21st, 2019. It is always observed on the third Monday of January every year in the United States.

This day is a day to cherish MLK’s legacy. One key legacy of Dr. King is his civility in debate and civility of engagement with the others, even those he strongly disagreed with. Despite all the challenges that Dr. King and his associates faced, he remained civil and honorable in word and deed. He, as well as other activists peacefully seeking equal rights, were dehumanized. He was called names and racial slurs. But he remained a shining star above the muck of the day.

This is a legacy of Dr. King’s that is not emphasized enough. Despite massive indignities and hate, Dr. King maintained his composure and remained honorable and dignified. It is on this day, in a debased political culture, that we sorely miss Dr. King and his example.

On this day, we call on all politicians in the US to help restore civility to our national conversation. Elected officials are leading individuals in society. Many see them as role models. We urge our elected officials not to model bad behavior.

On this special day, AHRC-USA affirms its unwavering commitment to protecting and advancing human rights and helping create a culture of respect for human rights. AHRC recognizes this day as a day of peace and unity where we join hands as we stand shoulder to shoulder building bridges of respect and understanding. We urge all politicians to see all other politicians, especially those they disagree with, as fellow human beings who should be respected even if one strongly and vehemently disagrees with them.

“Dr. King is a national and international hero who belongs to all humanity,” stated Dr. Saleh Muslah, AHRC Board’s President. “His legacy will continue to inspire for generations to come,” concluded Muslah.

“Dr. King said that ‘we must learn to live together as brothers or perish together as fools,’” observed Imad Hamad, AHRC Executive Director. “Mirroring bad language or bad behavior is not a moral imperative, it is an insidious and contagious form of moral bankruptcy,” added Hamad. “We urge all of our politicians to rise above divisions and live up to the legacy of civility as lived by Dr. King,” concluded Hamad.