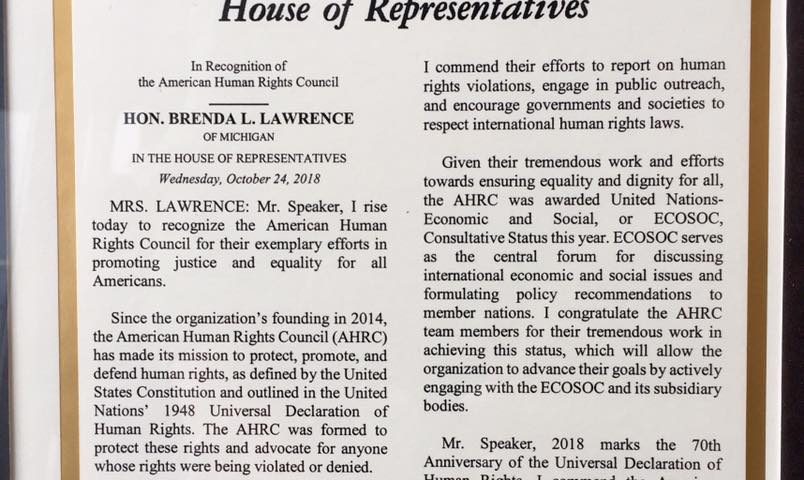 The American Human Rights Council (AHRC-USA) and its entire team extend their long- overdue sincere and heartfelt appreciation to the Hon. Congresswoman Brenda Lawrence- District 14 of Michigan, for presenting a Congressional Record recognizing AHRC and its work.

“Given their tremendous work and efforts towards ensuring equality and dignity for all, the AHRC was awarded United Nations Economic and Social, or ECOSOC, Consultative Status this year. I congratulate the AHRC team members for their tremendous work in achieving this status, which will allow the organization to advance their goals by actively engaging with the ECOSOC and its subsidiary bodies”.

AHRC is honored by this kind gesture by Congresswoman Lawrence. This the second Congressional Record presented to AHRC after the one presented by Congresswoman D. Dingell- District 13 on May 17, 2017. We greatly appreciate the recognition of our work.

“Congresswoman Lawrence is a strong supporter of the cause of human rights,” said Imad Hamad, AHRC Executive Director. “She is truly a role model in her commitment to serving the people of Michigan and the nation,” concluded Hamad.

Dear author, Your story is published and below is a link to the publication http://www.thenigerianvoice.com/news/273074/the-american-human-rights-council-ahrc-usa-extends-its-hea.html