AHRC EXPRESSES CONCERN REGARDING THE STATE OF HUMAN RIGHTS IN EGYPT 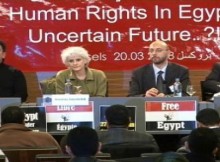 The American Human Rights Council (AHRC) joins the US and international human rights groups expressing serious concerns regarding the state of human rights and the ongoing violations of basic rights for Egyptian citizens, visitors, journalists, NGOs, international human rights aid missions and groups compromising the basic foundation of democracy. In Egypt there is a pattern of ongoing violations of people’s basic rights to live and function normally without fear, censorship, arrests, detentions and intimidation.

In a report published by Amnesty International on September 29, 2014, it noted, that   “According to official statistics, the Egyptian authorities continue to hold at least 16,000 detainees, in prisons and police stations since the ousting of former president Mohamed Morsi.  Their conditions of detention frequently fall far short of international human rights standards and may amount to cruel, inhuman and degrading treatment. Often the detainees face trumped up or politically motivated charges and trials that fall far short of international standards”.

According to media reports and several human rights Groups as well as the US State Department and the European Union,  the Egyptian government executed mass arrests against those who  practiced their right of association and assembly.   The vast majority of these arrests involved peaceful citizens and activists.  Most of these detainees are being held against their will without any form or shape of due process and without any adequate legal assistant nor facing any formal charges. Among the several human rights violation is the continued arrest of Mr. Mahmoud Abu Zied , A free-lancer journalist who has been held without any process for over a year.  The rise of mass arrests including children  and torture is a growing challenge in Egypt. Thousands of detainees are still pending any formal process and face nothing but continued renewal of their detentions without any evidence of any crime or violation.

AHRC is deeply concerned with the situation in Egypt as to the rights of perceived opponents of the regime and the rights of Egyptian women. The Egyptian government continues its incessant campaign of persecution of peaceful protesters through the use harassment, violence and discredited military tribunals. As to women, the Egyptian government is failing at its obligation to counter the harassment of women and girls in public places.  Egypt still lacks laws that deal with the serious issue of domestic violence. This situation is intolerable.

“Egypt is the biggest Arab country and arguably the most important. The abuses the Egyptian government is inflicting on the Egyptian people, regardless of the pretexts, are inexcusable and should shock the conscience of the world, “said Imad Hamad AHRC acting director. “We call upon the Egyptian  government to respect human rights and to obey international law and for the  human rights community to engage in a sustained campaign to defend the victims  of human rights violations in Egypt” continued Hamad.