AHRC DEPLORES THE ISRAELI MASSIVE ATTACKS AGAINST PALESTINIANS IN GAZA 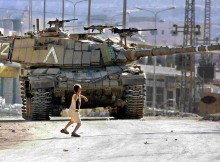 AHRC deplores the massive attacks and the collective punishment tactics launched by the Israeli military against the Palestinian population in Gaza and the occupied territories. Those paying the price of this conflict are the noncombatants- mainly women and children. According to media reports, in addition to the devastating destruction of houses and other property, close to 5000 thousands of civilians have been injured and more than 500 hundred have been killed mainly children.

AHRC also condemns the indiscriminate shelling and aerial bombardment of innocent civilians. The collective punishment, is a blatant violation of international law and of human rights. AHRC calls upon the United Nations, the US Administration and the international community to end these attacks and immediately investigate the Israeli human rights and war crimes violations.