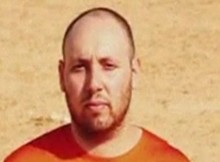 Sotloff was kidnapped and reportedly beheaded and the killers videotaped the crime hoping to spread fear, hate and loss of hope.  The brutal killing of Mr. Sotloff  once again showcases the barbaric nature of such crime and the evil that IS represents towards fellow humans by the name of politics. AHRC condemns this murder in the strongest terms and empathizes with Mr. Sotloff’s family. AHRC joins the nation in demanding swift action to bring those killers to justice.

Like Mr. Foley and other reporters, Mr. Sotloff, as a journalist was dedicated to telling the story of the plight of the people in Iraq and Syria amidst intense conflict. This terrorist act silences one of the voices of those who are speaking out for justice, fairness and civil and human rights in the Middle East.  AHRC reaffirms its strong stance that the freedom of the press should be protected and journalists, and other noncombatants, should not be targeted or held hostages under any circumstances. Journalists must be protected and not abused or killed on the basis of government policies that are clearly beyond their control. Journalists, and other noncombatants in war zones, should have their human rights respected by all the warring parties. AHRC reiterates its condemnation in the strongest words of the human rights violations against all noncombatants, especially journalists. AHRC demands justice for all the other victims of IS who include people of all religious backgrounds. AHRC highlights the importance of being mindful that terrorism has no religion and that the terrorist acts of a few should not be attributed to a religion, a sect or a national group. While IS professes belonging to the Sunni Islamic faith, its victims include Sunni Muslims.

The crisis in Iraq and Syria is ongoing with hundreds of thousands dying and millions displaced. AHRC urges the international community to do more to save Iraq and Syria from the ongoing humanitarian crisis. AHRC affirms that each human life is very precious and its value is not determined by race, color, national origin or faith.  “The barbaric nature of Mr. sotloff’s shocking murder should unite us against extremism, violence, and terrorism” said Imad Hamad, AHRC Acting Director. “This crime violates basic human decency.  It violates the fundamental principles of Islam and should not be attributed to Islam or Muslims.” continued Hamad.